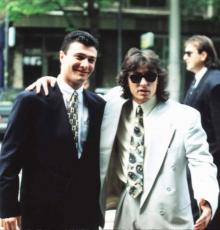 Iliev (in white suit) posing for a photo with his brother on his brother's wedding day, c.1994.

Vasil Iliev was born in 1965 in Kyustendil, Bulgaria. He was a very successful wrestler, becoming a national champion and heading the country's wrestling federation.

After the end of socialism, Iliev and a number of associates moved to Hungary, where they were engaged in some low-level criminal activities such as burglaries and car theft. Eventually, he made a substantial amount of money and turned back to Bulgaria where he set up Vasil Iiliev Security (also standing for Loyalty, Investments, and Security (Bulgarian: Vyarnost, Investitsii, Sigurnost). The company's official business was in insurance and security, but this was really a front for criminal activity including extortion, selling stolen cars and contract killings and so on. The company was declared illegal in 1994 but its activities continued under VIS-2, yet another front for Iliev's criminal empire.

Iliev later made millions smuggling petroleum into Serbia during the UN-imposed embargo. By this time, Iliev was arguably the most powerful crime boss in the Balkans.

On April 25, 1995, in Sofia, while driving with his new Mercedes-Benz car to his favorite restaurant to host a meeting between himself and singer Slavi Trifonov, unidentified men created a fake automobile accident to seal off the road and shot Iliev to death as he was driving. Iliev's death was so high profile that the Minister of the Interior arrived at the crime scene in minutes. Iliev's bodyguards, who were traveling in a separate car unarmed, remained unharmed.

The next boss of VIS was his younger brother and right-hand man Georgi Iliev. He was shot dead by an unidentified sniper in Sunny Beach, Bulgaria, little more than 10 years after his brother's death.

Retrieved from "https://reallifevillains.miraheze.org/w/index.php?title=Vasil_Iliev&oldid=60064"
Categories:
Cookies help us deliver our services. By using our services, you agree to our use of cookies.