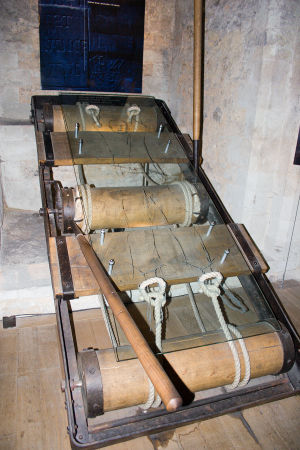 A rack in the Tower of London

The Rack is a torture device used in the 13th century which was when it was introduced. It consists of a wooden, rectangular table slightly raised form the ground with a roller at one or both ends. The victim is laid on the rack with the wrists fastened at one end and the ankles the other. As the interrogation progresses, a handle and ratchet attached to the top roller are used to very gradually increase the tension of the chains, inducing excruciating pain. By means of pulley's and leavers this roller could be rotated on it's own axis straining the ropes until the victims joints dislocated and separated. If muscle fibers were stretched too much they lose their ability to contract, outgrow their usefulness and become ineffective.

One gruesome aspect of being stretched too far on the rack is the loud popping noises made by snapping cartilage, ligaments, or bones. One powerful method for putting pressure upon prisoners was to force them to watch someone else being subjected to the rack. Confining the prisoner on the rack enabled further tortures to be simultaneously applied, typically including burning the flanks with hot torches or candles or using pincers made with specially roughened grips to tear out the nails of the fingers and toes.

Retrieved from "https://reallifevillains.miraheze.org/w/index.php?title=The_Rack&oldid=25903"
Categories:
Cookies help us deliver our services. By using our services, you agree to our use of cookies.