Theodore John Kaczynski (May 22, 1942), also known as the Unabomber , is an American domestic terrorist, anarcho-primitivist author, and former mathematics professor. He was a mathematics prodigy, but he abandoned an academic career in 1969 to pursue a primitive lifestyle. Between 1978 and 1995, he killed three people and injured 23 others in an attempt to start a revolution by conducting a nationwide bombing campaign targeting people involved with modern technology. In conjunction with this effort, he issued a social critique opposing industrialization while advocating a nature-centered form of anarchism.

Theodore John Kaczynski was born on May 22, 1942, in Chicago, Illinois, to working-class, second-generation Polish Americans, Wanda Theresa (née Dombek) and Theodore Richard Kaczynski, a sausage maker. His parents told his younger brother, David Kaczynski, that Ted had been a happy baby until severe hives forced him into hospital isolation with limited contact with others, after which he "showed little emotion for months". Wanda recalled Ted recoiling from a picture of himself as an infant being held down by physicians examining his hives. She said he showed sympathy to animals who were in cages or otherwise helpless, which she speculated stemmed from his experience in hospital isolation.

Theodore John Kaczynski when he was still a young math teacher.

From first to fourth grade, Kaczynski attended Sherman Elementary School in Chicago, where administrators described him as "healthy" and "well-adjusted". In 1952, three years after David was born, the family moved to southwest suburban Evergreen Park, Illinois; Ted transferred to Evergreen Park Central Junior High School. After testing scored his IQ at 167, he skipped the sixth grade. Kaczynski later described this as a pivotal event: previously he had socialized with his peers and was even a leader, but after skipping ahead he felt he did not fit in with the older children and was bullied.

Neighbors in Evergreen Park later described the Kaczynski family as "civic-minded folks", with one stating that the parents "sacrificed everything they had for their children". Both Ted and David were intelligent, but Ted stood out in particular. One neighbor said she had "never known anyone who had a brain like he did", while another said that Ted was "strictly a loner" who "didn't play ... an old man before his time." His mother recalled Ted as a shy child who would become unresponsive if pressured into a social situation. At one point she was so worried about Ted's social development that she considered entering him in a study for autistic children led by Bruno Bettelheim. She decided against it after observing Bettelheim's abrupt and cold manner.

In 1990, Ted's father Theodore, suffering from terminal cancer, died by suicide with a .22 caliber rifle. Theodore spent his last days with his family members, showing them affection as an implicit farewell.

In 1971, Kaczynski moved to a remote cabin without electricity or running water near Lincoln, Montana where he lived as a recluse. His original goal was to become self-sufficient so that he could live autonomously. He taught himself survival skills such as tracking game, edible plant identification, organic farming, bow drilling and other primitive technologies. He used an old bicycle to get to town, and a volunteer at the local library said he visited frequently to read classic works in their original languages. Other Lincoln residents said later that such a lifestyle was not unusual in the area.

He witnessed the destruction of the wilderness surrounding his cabin and concluded that living in nature was untenable; he began his bombing campaign in 1978.

In 1995, he sent a letter to The New York Times and promised to "desist from terrorism" if The Times or The Washington Post published his essay Industrial Society and Its Future, in which he argued that his bombings were extreme but necessary to attract attention to the erosion of human freedom and dignity by modern technologies that require large-scale organization.

In all, 16 bombs were attributed to Kaczynski. While the improvised explosive devices he created varied widely through the years, all but the first few contained the initials "FC", which Kaczynski later said stood for "Freedom Club", inscribed on parts inside. He purposely left misleading clues in the devices and took extreme care in preparing them to avoid leaving fingerprints; latent fingerprints on some of the devices did not match those found on letters attributed to Kaczynski

Kaczynski was the subject of the longest and most expensive investigation in the history of the Federal Bureau of Investigation (FBI). Before his identity was known, the FBI used the acronym UNABOM (University and Airline Bomber) to refer to his case, which resulted in the media naming him the "Unabomber". The FBI and Attorney General Janet Reno pushed for the publication of Industrial Society and Its Future, which led to a tip-off from Kaczynski's brother David, who recognized the writing style. 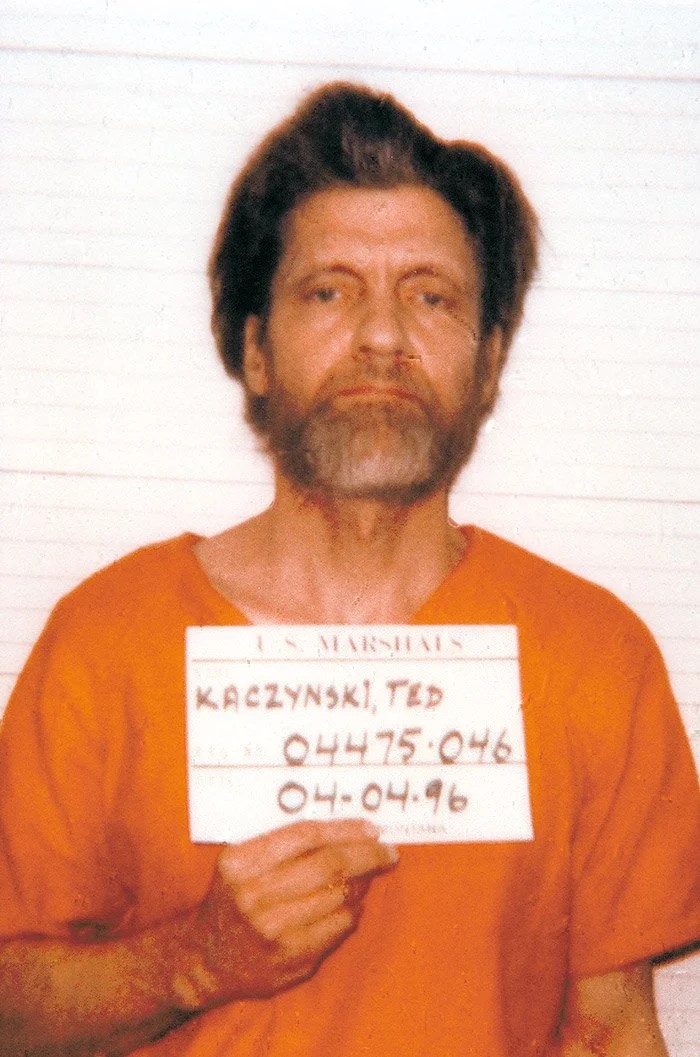 FBI agents arrested Kaczynski on April 3, 1996, at his cabin, where he was found in an unkempt state. A search of his cabin revealed a cache of bomb components, 40,000 hand-written journal pages that included bomb-making experiments, descriptions of the Unabomber crimes and one live bomb, ready for mailing. They also found what appeared to be the original typed manuscript of Industrial Society and Its Future. By this point, the Unabomber had been the target of the most expensive investigation in FBI history. After his arrest, Kaczynski tried unsuccessfully to dismiss his court-appointed lawyers because they wanted him to plead insanity in order to avoid the death penalty, as he did not believe that he was insane. In 1998, a plea bargain was reached under which he pleaded guilty to all charges and was sentenced to eight life sentences without the possibility of parole. He has been imprisoned at ADX Florence, a supermax prison in Florence, Colorado. In December 2021, the 79 year old Kaczynski was transferred to the Federal Medical Center in Butner, North Carolina.

Retrieved from "https://reallifevillains.miraheze.org/w/index.php?title=Ted_Kaczynski&oldid=160835"
Categories:
Cookies help us deliver our services. By using our services, you agree to our use of cookies.