Joseph Vissarionovich Stalin (Russian: Иосиф Виссарионович Сталин, born Iosif Vissarionovich Dzhugashvili, Georgian: იოსებ ვისარიონოვიჩ ჯუღაშვილი; December 18, 1878 – March 5, 1953) was the first General Secretary of the Communist Party of the Soviet Union's Central Committee from 1924 until his death in 1953. He led the Soviet Union through a period of rapid growth and industrialization, and led it through World War II in which the Red Army was victorious over Nazi Party and captured Berlin in 1945, ending the war in Europe.

Joseph Stalin is considered to be one of the most brutal dictators in history and is extremely infamous for his immense cruelty. His regime was responsible for numerous human rights abuses, mass repression, ethnic cleansing, propaganda, deportation, starvation, and numerous executions. It is estimated that 60 million people died under his rule.

Stalin was born as Iosif Dzhugashvili to a Georgian family in Gori, Tiflis Governorate, Caucasus Vice royalty, Russian Empire (now in modern Georgia) on December 18th, 1878. He was born into a poor family, two of his siblings died in infancy prior to his birth. His father Besarion was an abusive alcoholic who beat his wife named Keke who was Joseph's mother and Joseph himself. He later changed his surname to "Stalin", meaning "Man of Steel" in Russian. He became interested in Marxism at a young age after reading some of Vladimir Lenin's works. It was that this time that he joined the Bolshevik party. 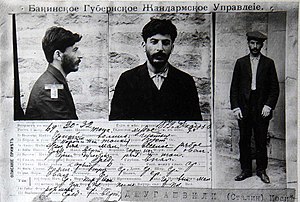 The party needed money and the young Stalin started doing bank heists to earn money for the party. Between 1902 and 1913, he got arrested eight times. In June 1907, Stalin along with other Bolsheviks were involved in a major bank robbery in Tiflis (now Tbilisi, Georgia) in which they hijacked a stagecoach along with the police and guards. They got away with 241,000 rubles.

While formally the office of the General Secretary was elective and wasn't initially regarded as the top position in the Soviet state, after Lenin's death in 1924, support became consolidated around Stalin. Instead of the ideology of world revolution professed by Leon Trotsky, the Red Army organizer, proponent of world revolution, Stalin's ideology of socialism in one country became the primary line of the Soviet politics. There exists Stalinism, an ideology that centers around Stalin's ideas and policies in the Soviet Union.

In 1939, Stalin signed a non-aggression pact with Adolf Hitler, and soon Nazi Germany and subsequently the Soviet Union invaded Poland. Hitler betrayed this pact in 1941 with the invasion of the USSR; the Red Army was soon able to defeat the Nazis, and they captured Berlin in 1945. Stalin, along with Franklin Roosevelt of the United States and Winston Churchill of the United Kingdom were among the "Big Three" in the allied leaders of WW2.

Even though the alliance was temporary, he was a very effective allied leader and has respect today for being one of the people who lead the allies to victory. After the war, communist governments gained power in eastern Europe and in other countries like China, thus causing him, as the leader of the most influential socialist state, to be branded a villain by the Western world and sparking the Cold War.

As Leader of the Soviet Union

Lenin was hesitant to the idea that Stalin would succeed him, and wrote sometime before his death "Comrade Stalin is unfit for leadership, he is too rude and under-educated." Lenin preferred Leon Trotsky to succeed him. It is unknown if the letter is legitimate or not. Stalin's leadership however lead to a much more efficient military service; Stalin said "In the USSR Military it takes more courage to retreat than it does to advance."

Famously, Lenin had ordered for both homosexuality, divorce and abortion to be decriminalized once his grip on power was absolute. Stalin however re-criminalized homosexuality in 1933, as well as abortion. This was possibly due to him wanting a larger population of the Soviet Union. However, lesbian activity was still legal throughout his period.

Stalin's regime partly to blame for The Holodomor, a natural famine in Ukraine. Around 12 million people died in the famine, which is considered an act of Genocide by 16 countries.

Trotsky's corpse after being killed by Stalin.

In 1944, he ordered the deportations of Chechens, Ingush, and Tartars, all of whom are majority Muslim, from their homelands to Central Asia after accusing them of collaborating with Nazi Germany. Over 400,000 people were killed during these deportations. They were not allowed to return to their homelands until 1957.

A large number of Stalin's allies throughout his tenure as General Secretary of the Communist Party of the Soviet Union were killed. Most notably, many of his opponents were killed during the Great Purge of the late 30's. Stalin died in 1953. His successor, Nikita Khrushchev, then began the capitalistic Soviet policy that continued into the 1980s and led to its collapse.

Stalin led the Soviet Union through rapid industrialization and through victory in World War II. He remains very popular; popular opinion within the Russian Federation is mixed.

Results of a poll taken in 2006 stated that over 35% of Russians would vote for Stalin if he were still alive. Fewer than a third of all Russians regarded Stalin as a "murderous tyrant". In a July 2007 poll, 54% of the Russian youth agreed that Stalin did more good than bad, and 46% (of them) disagreed that Stalin was a "cruel tyrant". Half of the respondents, aged from 16 to 19, agreed Stalin was a wise leader. In 2011, a poll by the Carnegie Endowment for International Peace found that 45 percent of Russians had a "generally positive" view of Stalin. In his home country of Georgia, that number rises to 68 percent. Only a few years beforehand, a TV poll of 50 million Russians named Stalin the “third-greatest Russian of all time.” Western Ukraine still commissions statues of him on a regular basis.

Retrieved from "https://reallifevillains.miraheze.org/w/index.php?title=Joseph_Stalin&oldid=161621"
Categories:
Cookies help us deliver our services. By using our services, you agree to our use of cookies.