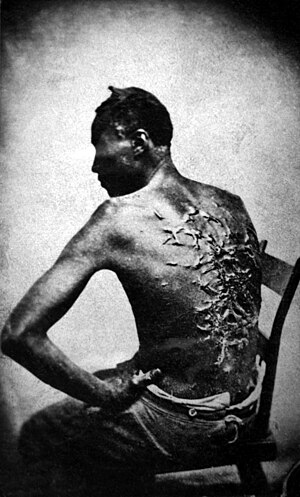 Whip wounds on a slave's back.
Slavery is the unconditional servitude of one individual to another. A slave is usually acquired by purchase and legally described as chattel or a tangible form of movable property.

For much of human history, slavery has constituted an important dimension of social and occupational organization. The word slavery originated with the sale of Slavs to the Black Sea region during the ninth century. Slavery existed in European society until the nineteenth century, and it was the principal source of labor during the process of European colonization.

Some forms of slavery existed among the indigenous societies in the Americas before the arrival of Christopher Columbus. However, the reconstruction of the Americas after 1492 led to a system of slavery quite unprecedented in human experience. Slavery in the Americas was a patently artificial social and political construct, not a natural condition. It was a specific organizational response to a specific labor scarcity. African slavery in the Americas, then, was a relatively recent development in the course of human history—and quite exceptional in the universal history of slave societies.

Slavery was also a form of power relations, so slaves by and large did not have an equal voice in articulating a view of their condition. Their actions, however, spoke loudly of their innermost thoughts and represented their reflections on, and reactions to, the world in which they found themselves. Columbus thought the people he encountered in the Caribbean in 1492 might make good slaves, as he seemed to infer in his log of October 10, 1492, when he wrote: "They ought to make good and skilled servants, for they repeat very quickly whatever we say to them. I think that they can easily be made Christians, for they seem to have no religion. If it pleases Our Lord, I will take six of them to Your Highness when I depart, in order that they may learn our language" (Columbus, p. 77).

The transatlantic slave trade formally began in 1518, when King Charles I of Spain sanctioned the direct importation of Africans to his colonies in the Americas, finally acknowledging that the potential supply of indigenous slaves was inadequate to maintain the economic viability of his fledgling overseas colonies.

Shortly thereafter, the Portuguese started to import Africans to Brazil to create a plantation society and establish an Atlantic bulwark against other Europeans intruding along the coast. As the demand for labor grew, the number of Africans imported as slaves increased, and manual labor throughout the Americas eventually became virtually synonymous with the enslavement of Africans.

The transatlantic slave trade became a lucrative international enterprise, and by the time it ended, around 1870, more than ten million Africans had been forcibly transported and made slaves in the Americas. Many millions more died in Africa or at sea in transit to the Americas.

The slave trade responded to an interrelated series of factors operating across Africa, at the supply side, and also in the Americas, at the market level. The trade can be divided into four phases, strongly influenced by the development of colonialism throughout the hemisphere. In the first phase, lasting to about 1620, the Americas were the domain of the Spanish and the Portuguese.

These Iberian powers introduced about 125,000 slaves to the Americas, with some 75,000 (or 27 percent of African slave exports of the period) to the Spanish colonies, and about 50,000 (18 percent of the trade) to Brazil. This was a relatively small flow of about 1,000 slaves per year, most of whom were supplied from Portuguese forts along the West African coast. But slavery in the towns, farms, and mines of the Americas then employed less African slaves (about 45 percent of the total Atlantic trade) than in the tropical African islands of Fernando Po and Sâo Tomé, Europe proper, or the islands of the Madeiras, Cape Verdes, and the Azores (about 55 percent of trade). Indeed, the small island of Sâo Tomé alone received more than 76,000 African slaves during the period, exceeding the entire American market.

Between 1930 and 1960, the Soviet Union created a system of slave labor camps called which were known as Gulags.

Prisoners in these camps were worked to death by a combination of extreme production quotas, physical and psychological brutality, hunger, lack of medical care, and the harsh environment. Aleksandr Solzhenitsyn, who survived eight years of Gulag incarceration, provided first hand testimony about the camps with the publication of The Gulag Archipelago, for which he was awarded the Nobel Prize in Literature. Fatality rate was as high as 80% during the first months in many camps. Hundreds of thousands of people, possibly millions, died as a direct result of forced labour under the Soviets.

During World War II, Nazi Germany effectively enslaved about 12 million people as part of the Holocaust, both those considered undesirable and citizens of conquered countries, with the avowed intention of treating these Untermenschen (sub-humans) as a permanent slave-class of inferior beings who could be worked until they died, and who possessed neither the rights nor the legal status of members of the Aryan race.

Besides Jews, the harshest deportation and forced labour policies were applied to the populations of Belarus, Ukraine, and Russia. By the end of the war, half of Belarus' population had been killed or deported.

Even though slavery is now outlawed in every country, the number of slaves today is estimated as between 12 million and 29.8 million. According to a broad definition of slavery, there were 27 million people in slavery in 1999, spread all over the world. In 2005, the International Labour Organization provided an estimate of 12.3 million forced labourers.

According to a 2003 report by Human Rights Watch, an estimated 15 million children in debt bondage in India work in slavery-like conditions to pay off their family's debts.

Slavoj Žižek asserts that new forms of contemporary slavery have been created in the post-Cold War era of global capitalism, including migrant workers deprived of basic civil rights on the Arabian Peninsula, the total control of workers in Asian sweatshops and the use of forced labor in the exploitation of natural resources in Central Africa.

Human trafficking is considered to be the most prominent form of modern slavery.

Retrieved from "https://reallifevillains.miraheze.org/w/index.php?title=Slavery&oldid=140831"
Categories:
Cookies help us deliver our services. By using our services, you agree to our use of cookies.