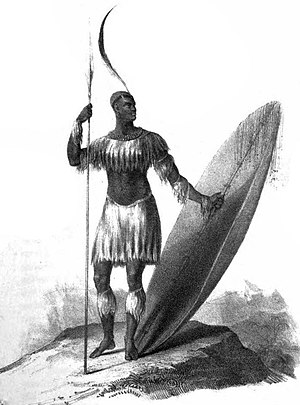 File:Shaka-Zulu.jpg
"Women who bear children must exist in Zululand only."

Shaka Zulu (circa 1787 - September 22nd, 1828) was an enormously important leader of the Zulu tribe. He transformed the Zulu nation, but caused enormous damage and destruction throughout southern Africa.

Shaka Zulu was the most influential Zulu leader ever, known for his weaponry and reformation of Zulu battle tactics, the fundamental transformation of the Zulu military, the "bull's head" battle formation, and his iklwa spear. Shaka's father was the leader of the Zulu tribe; his mother was a princess from the rival eLangeni tribe. Shaka instituted massive reforms, transforming the Zulus from a minor tribe into a massive empire filled with excellent soldiers he took by crushing other tribes in battle. He also imposed incredibly strict rules on his forces; any soldier who forgot or lost their weapon or had a lover was executed. He also dictated his warriors not to leave one child and exterminate the whole tribe of his enemies, declaring if one of his divisions lost a battle all of its members would be slaughtered along with the families of the members. In 1823, Shaka eradicated a majority of southeasten Africa. Its estimated he murdered upto two million people (most in mass exercutions) to build his empire.

In 1827, Shaka's mother passed away, and he went ballistic and started killing his own tribe. Some 7000 Zulus were killed, including pregnant women and their husbands, and even livestock were butchered by Shaka and his agents. Shaka continued to go more an more insane, declaring war after war and turning on his alies. He put the Zulu culture in jeopardy by attacking the European Settlers, despite spending years trying to build good relationships between them. Shaka was eventually assasinated by his half-brothers Dingane and Mhlangana. A chieftain with so much promise ended up into madness and rage had finally come to a bloody end.

Retrieved from "https://reallifevillains.miraheze.org/w/index.php?title=Shaka_Zulu&oldid=42391"
Categories:
Hidden category:
Cookies help us deliver our services. By using our services, you agree to our use of cookies.