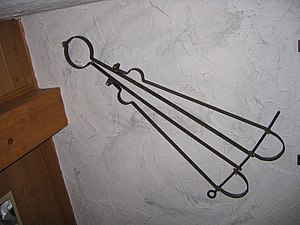 The Scavenger's Daughter was a type of torture device invented in the reign of King Henry VIII of England. However, extant documents reveal that the device was rarely used.

How it was used

Scavenger's Daughter (or Skevington's Daughter) was invented as an instrument of torture in the reign of Henry VIII by Sir Leonard Skeffington, Lieutenant of the Tower of London, a son of Sir William Skeffington, Lord Deputy of Ireland, and his first wife, Margaret Digby. It was an A-frame shaped metal rack to which the head was strapped to the top point of the A, the hands at the midpoint and the legs at the lower spread ends; swinging the head down and forcing the knees up in a sitting position so compressed the body has to force the blood from the nose and ears

Retrieved from "https://reallifevillains.miraheze.org/w/index.php?title=Scavenger%27s_Daughter&oldid=30905"
Categories:
Cookies help us deliver our services. By using our services, you agree to our use of cookies.