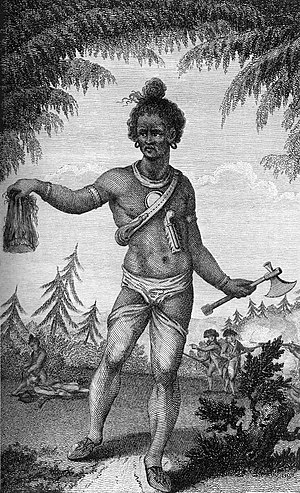 Scalping is the act of removing the scalp, or a portion of the scalp, either from a dead body or another living person. The initial purpose was to provide a trophy of battle or portable proof of a combatant's prowess in war. Eventually, the act became motivated primarily for financial reasons; payment received per scalp acquired.

Scalping is often associated with frontier warfare in North America, and was practiced by Native Americans, colonists, and frontiersmen across centuries of violent conflict during the American Indian Wars. Some Mexican (e.g., Sonora and Chihuahua) and American territories (e.g., Arizona) paid for bounties for enemy Native American scalps. Contrary to popular belief, scalping was far from universal amongst Native Americans.

Retrieved from "https://reallifevillains.miraheze.org/w/index.php?title=Scalping&oldid=139020"
Categories:
Cookies help us deliver our services. By using our services, you agree to our use of cookies.