Robert William Fisher (April 13th, 1961 - ) is an American fugitive wanted for the alleged murder of his wife and two children, and the explosion of the house where they lived in Scottsdale, Arizona, on April 10th, 2001. Fisher He was named by the FBI as the fugitive number 475 included in the list of the ten most wanted fugitives by the FBI on June 29th, 2002.

Robert William Fisher was born in Brooklyn, New York in 1961 to William Fisher, a banker, and Jan Howell. He has two sisters and attended Sahuaro High School in Tucson, Arizona. His parents divorced in 1976, when he was 15. According to friends and relatives, the divorce was very turbulent and unsettling, leaving long-lasting effects on Fisher. He spoke of it with coworkers at Mayo Clinic Hospital and confided to one associate that his life would have been different had his mother not left the family.

Fisher, a U.S. Navy veteran, married Mary Cooper in 1987. He has worked as a surgical catheter technician, respiratory therapist, and firefighter, and is an avid outdoorsman, hunter, and fisherman. Fisher was described as a cruel and distant control freak of a father who was awkward with his children, but tried to hold on to an image as a devoted family man. His mother-in-law, Ginny Cooper, told investigators that, "Fisher didn't socialize often with family because of a fear of getting too close to people and losing them."

Fisher's mother told investigators that she had been a "yes-sir" wife who didn't stand up to her husband. She added that she saw similar dynamics early in her son's marriage to Mary, and had talked to her about her concerns. One close friend of Fisher stated that his family resembled his childhood family

Fisher had been an active member of the men's ministry of Scottsdale Baptist Church, but unlike Mary, he had begun to withdraw from his activities a few months before the murders. In 1998, the Fisher went to the senior pastor of their church to receive marriage counseling. Fisher told his coworkers a one-night adventure with a prostitute he met in a massage room. He was concerned that Mary discovered that it was the cause of a urinary tract infection that left him ill for several days in December 2000.

Fisher told a hunting partner that he was renewing his commitment to his faith and marriage because "he could not live without his family," possibly implying that he would consider suicide instead of divorce. According to psychologists, an intense fear of loss is not unusual for an individual traumatized by divorce while he was a teenager. In the weeks before her death, Mary told several friends that she was going to divorce Fisher.

On the morning of April 10th, 2001, Mary was shot in the back of the head and her children's throats were slashed from ear to ear in the hours before their house exploded at 8:42 am. Firefighters were immediately alerted to the explosion, which was strong enough to collapse the front brick wall and rattle the frames of neighboring houses for one-half mile (800 m) in all directions. Firefighters kept the 20-foot-high (6 m) blaze from spreading to other homes. A series of smaller secondary explosions, believed to be caused by either rifle ammunition or paint cans, forced them to keep their distance. One suffered minor injuries to his leg when he lost his balance and fell near the burning house.

The gas line from the back of the house's furnace had been pulled out in an attempt to conceal evidence of the homicides. The accumulating gas was later ignited by a candle that Fisher had allegedly lit, waiting for the gas to accumulate and descend to the flame hours after being lit. This delayed fuse would have given Fisher an approximate ten hour head start in his successful attempt to evade law enforcement. The burned bodies of a woman and two children were found lying in bed in the remains of the burnt out house. They were identified as Mary (age 38), and her two children, Brittney (age 12) and Bobby (age 10). Investigators theorized that Fisher murdered his family because he felt threatened by Mary's intent to divorce him, and didn't want his children to go through what he did as a child.

Fisher, who disappeared at the time of the murders, was named as an official (and to date, only) person of interest in the case on April 14th, 2001, when Arizona Department of Public Safety officers were instructed in a statewide bulletin to arrest him. On April 20th, the last physical evidence of Fisher's whereabouts surfaced, when police found Mary's Toyota 4Runner and their dog, Blue, in Tonto National Forest, near the town of Young, Arizona, a hundred miles north of Scottsdale. Although police searched the area around where the car was found, it has been alleged that they did not search the nearby network of caves sufficiently. Several professional cavers have suggested that Fisher used these as a hiding place, before either escaping, killing himself or dying from low oxygen levels.

On July 19th, a state arrest warrant was issued in Phoenix, charging Fisher with three counts of first-degree murder and one count of arson. Subsequently, he was declared a fugitive, and a federal arrest warrant was issued by the United States District Court for the District of Arizona, charging him with unlawful flight to avoid prosecution. On June 29, 2002, Fisher was named by the FBI as the 475th fugitive to be placed on the Ten Most Wanted list. He was also on the America's Most Wanted "Dirty Dozen" list of the show's most notorious fugitives, and was profiled on The Hunt with John Walsh. The FBI offers a reward of up to $100,000 for information leading to his capture. As of April 2003, FBI had received "hundreds and hundreds of leads." However, all reported sightings of Fisher have been inconclusive or false.

In February 2004, an individual with a striking physical resemblance to Fisher was arrested in Vancouver, British Columbia, Canada by the Royal Canadian Mounted Police. Fingerprints eventually confirmed that he was not Fisher. He was held by Canadian police for approximately one week until a family member correctly identified him. The FBI alerted local law enforcement in 2012 that Fisher may be living in the Payson area in Gila County, Arizona. In October 2014, police raided a house in Commerce City, Colorado after receiving a tip that Fisher was hiding there. Despite arresting two occupants, they did not find any sign of Fisher. 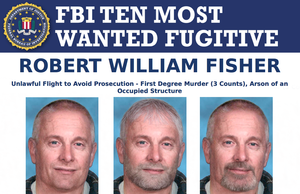 In April 2016, FBI officials and Scottsdale Police showed new photos of Fisher updated over the years during a press conference on the 15th anniversary of the killings.

Fisher is considered armed and extremely dangerous and has ties to Florida and New Mexico. There has been speculation that he has committed suicide or started a new life under an assumed identity. FBI agent Caldwell's sense of his personality and habits is that he is "arrogant. He's cocky. He's a know-it-all...and a loner." He chews tobacco and favors the Copenhagen brand, sometimes walks in an odd, erect manner with his chest out due to back pain, and is an avid hunter and fisherman.

Retrieved from "https://reallifevillains.miraheze.org/w/index.php?title=Robert_William_Fisher&oldid=120407"
Categories:
Cookies help us deliver our services. By using our services, you agree to our use of cookies.