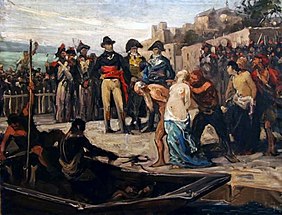 Republican marriage (French: mariage républicain) was a form of execution that allegedly occurred in Nantes during the Reign of Terror in Revolutionary France and "involved tying a naked man and woman together and drowning them". This was reported to have been practiced during the drownings at Nantes (noyades) that were ordered by local Jacobin representative-on-mission Jean-Baptiste Carrier between November 1793 and January 1794 in the city of Nantes. Most accounts indicate that the victims were drowned in the Loire River, although a few sources describe an alternative means of execution in which the bound couple is run through with a sword, either before, or instead of drowning.

While the executions of men, women and children by drowning in Nantes is not generally disputed, the factual nature of the "republican marriages," in particular, has been doubted by several historians who suspect it to be a legend.The earliest reports of such "marriages" date from 1794, when Carrier was tried for his crimes, and they were soon cited by contemporary counter-revolutionary authors such as Louis-Marie Prudhomme and Louis Gabriel Ambroise de Bonald.

Retrieved from "https://reallifevillains.miraheze.org/w/index.php?title=Republican_marriage&oldid=34190"
Categories:
Cookies help us deliver our services. By using our services, you agree to our use of cookies.