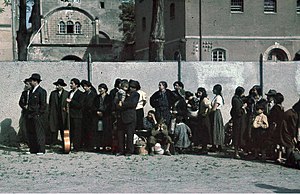 Romani civilians in Asperg, Germany are rounded up for deportation by German authorities on 22 May 1940.

The Porajmos, also known as the Romani Genocide or the Gypsy Holocaust, was the effort by the Nazi Party and its World War II allies in the Axis Powers to commit genocide/ethnic cleansing against Europe's Romani people.

Under Adolf Hitler, a supplementary decree to the Nuremberg Laws was issued on 26 November 1935, classifying Gypsies as "enemies of the race-based state", thereby placing them in the same category as the Jews. Thus, in some ways the fate of the Roma in Europe paralleled that of the Jews in the Holocaust.

Historians estimate that between 220,000 and 500,000 Romani were killed by the Germans and their collaborators—25% to over 50% of the slightly fewer than 1 million Roma in Europe at the time. A more thorough research by Ian Hancock revealed the death toll to be at about 1.5 million.

In 1982, West Germany formally recognized that Germany had committed genocide against the Romani. In 2011, Poland officially adopted 2 August as a day of commemoration of the Romani genocide.

Within the Nazi state, first persecution, then extermination, was aimed primarily at stationary "Gypsy mongrels". Since the fall of 1939, initially only partially implemented deportation intentions existed. Starting in February 1943, a majority of the Roma living in the German Reich were deported to the specially established Gypsy concentration camp at Auschwitz Birkenau. Other Roma were deported there from the occupied Western European territories. Only a minority survived.

Outside the reach of systematic registration, as in the German-occupied areas of Eastern and Southeastern Europe, the Roma who were most threatened were those who, in the German judgment, were "vagabonds," though some were actually refugees or displaced persons. Here, the members of the minority fell victim above all to massacres by German military and police formations, as well as to the Schutzstaffel task forces and the fight against armed resistance to the German occupation.

Romani were also persecuted by the puppet regimes that cooperated with the Third Reich during the war, especially the notorious Ustaše regime in occupied Croatia, Bosnia-Herzegovina and Syrmia. Tens of thousands of Romani were killed in the Jasenovac concentration camp, along with Serbs, Jews, and Anti-fascist Muslims and Croats. Yad Vashem estimates that the Porajmos was most intense in Yugoslavia, where around 90,000 Romani were killed. The Ustaše government virtually annihilated the country's Romani population, killing an estimated 25,000 and also deporting around 26,000.

In the Territory of the Military Commander in Serbia, the German occupiers and Serbian collaborationist puppet government Government of National Salvation killed thousands of Romani in the Banjica concentration camp, Crveni Krst concentration camp and Topovske Šupe concentration camp along with Jews. In August 1942 Harald Turner reported to his superiors that "Serbia is the only country in which the Jewish question and the Gypsy question have been solved."

The governments of some Nazi German allies, namely Slovakia, Finland, Italy, Vichy France, Hungary, and Romania, also contributed to the Nazi plan of Romani extermination, but most Romani in these countries survived, unlike those in Ustaše Croatia or areas directly ruled by Nazi Germany (such as occupied Poland). The Hungarian Arrow Cross Party government deported between 28,000 and 33,000 Romani out of a population that was estimated to be between 70,000 and 100,000.

Romania's National Legionary State government ruled jointly by Ion Antonescu and the Iron Guard, as well as the successor state ruled solely by Antonescu, did not systematically exterminate the approximately 300,000 Roma on its territory. Some resident Roma were deported to Romanian-run concentration camps in occupied Transnistria. Of the estimated 25,000 Romani inmates of these camps, 11,000 (44%, or almost half)

According to eyewitness Mrs. de Wiek, Anne Frank, a notable Jewish Holocaust victim, is recorded as having witnessed the prelude to the murder of Romani children at Auschwitz: "I can still see her standing at the door and looking down the camp street as a herd of naked gypsy girls were driven by, to the crematory, and Anne watched them going and cried."

In the Protectorate of Bohemia and Moravia, Romani internees were sent to the Lety and Hodonín concentration camps before being transferred to Auschwitz-Birkenau for gassing. What makes the Lety camp unique is that it was staffed by Czech guards, who could be even more brutal than the Germans, as testified in Paul Polansky's book Black Silence. The genocide was so thorough that the vast majority of Romani in the Czech Republic today are actually descended from migrants from Slovakia who moved there during the post-war years in Czechoslovakia. In Nazi-occupied France, between 16,000 and 18,000 were killed.

The small Romani population in Denmark was not subjected to mass killings by the Nazi occupiers, instead, it was simply classified as "asocial". Angus Fraser attributes this to "doubts over ethnic demarcations within the travelling population". The Romanis of Greece were taken hostage and prepared for deportation to Auschwitz, but they were saved by appeals from the Archbishop of Athens and the Greek Prime Minister.

In 1934, 68 Romani, most of them Norwegian citizens, were denied entry into Norway, and they were also denied transit through Sweden and Denmark when they wanted to leave Germany. In the winter of 1943–1944, 66 members of the Josef, Karoli, and Modis families were interned in Belgium and deported to the gypsy department in Auschwitz. Only four members of this group survived.

Retrieved from "https://reallifevillains.miraheze.org/w/index.php?title=Porajmos&oldid=128111"
Categories:
Cookies help us deliver our services. By using our services, you agree to our use of cookies.