Osama bin Laden (born Osama bin Mohammed bin Awad bin Laden; March 10, 1957 – May 2, 2011) was a Saudi-born Militant Islamist terrorist leader who was one of the founders and leaders of Al-Qaeda. He is best known for being the mastermind behind the infamous and tragic September 11 attacks - which resulted in one of the largest losses of civilian life during peacetime on American soil. He had also been responsible for the creation of a vast international terrorist network that champions jihad and the destruction of Western democracy in favor of Islamic law.

On May 2, 2011, bin Laden was shot and killed by the Navy SEALs in his compound in Abbottabad, Pakistan, and was buried at sea. After President Obama had made the announcement, U.S. citizens gathered around the White House and celebrated Osama's death. Afterward, sometime in June 2011, al-Qaeda announced that Ayman al-Zawahiri was elected as the new leader; plus, they vowed to get revenge on the United States to avenge Osama bin Laden.

After Osama was born, Mohammed and Hamida divorced, and Hamida was recommended to Mohammed al-Attas. During the late 1950s or early 1960, Hamid married al-Attas, and today, they are still together.

In 1967 when Osama was 10 years old, Mohammed died in an airplane accident. From 1968 to 1976, Osama attended Al-Thager Model School, a secondary school in Jeddah. He married Najwa Ghanem, a Syrian who was his cousin in 1974, the first of his 5 wives. From 1979 to 1981, bin Laden attended King Abdulaziz University, where he studied economics and business administration. During the Soviet-Afghan War, he fought against the communist government, joining the mujaheddin. He was mentored by Palestinian scholar and militiant Abdullah Yusuf Azzam. They established the Maktab al-Khidamat to raise funds and recruit foreign mujaheddin. The MAK remained close to the Pakistani ISI and the Saudi intelligence agency, Al Mukhabarat Al A'Amah funneled money through it. The MAK also remained close with the Peshawar Seven, an alliance of Afghan mujaheddin parties.

After the Soviet Union withdrew from Afghanistan in 1989, bin Laden returned to Saudi Arabia with a hero's welcome. However, he would often engage in opposition movements against the Saudi government while working for his family's business. After the Iraqi invasion of Kuwait put the Saudi ruling family in jeopardy, Bin Laden advised King Fahd and Defense Minister Sultan to not cooperate with the United States, preferring to defend the kingdom through Muslim help, arguing that the holy cities of Mecca and Medina should only be defended by Muslims. His remarks were rebuffed, with the Saudi government attempting to silence him. He was eventually expelled from Saudi Arabia and moved to Afghanistan and then to Sudan, where he was sheltered personally by President Omar al-Bashir.

Bin Laden had been in hiding for years and there had been doubts as to whether or not the mastermind was even still alive - but every now and then, Osama released a videotape of himself trying to intimidate the Western world with threats of further violence: Because of the nature of Islamic fundamentalism, it is argued that bin Laden and his followers were amongst the most dangerous terrorists in modern-times. 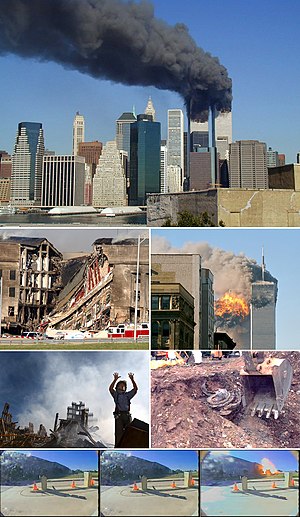 However, unlike many of his followers, bin Laden hadn't shown himself to be fanatical enough to risk his own life; in fact, he had gone to great lengths to ensure his own survival, despite encouraging others to commit suicide bombings and other atrocities in defense of his cause. After escaping Afghanistan during the Battle of Tora Bora, he fled to neighboring Pakistan. When his compound was finally discovered, he used one of his own wives as a human shield and was gunned down attempting to flee and save his own life.

Bin Laden was a strong believer in Sharia law and believed that all other ideologies must be opposed violently and without mercy - he also believed that civilians (even women and children) are legitimate targets in his war against the unbeliever, he often viewed America and Israel as imperialistic nations that must be destroyed or convinced into merging with Islam, he had often urged America and the Western world, in general, to abandon such vices as music, sex, and liberalism: He was also antisemitic and believed that Jews are a dangerous enemy of Islam and must be treated as such.

Osama's violent criticism of the world was not limited to the Western world as he also believed almost all current Muslim nations had failed in their responsibilities as Muslim nations, he once believed that the Taliban-controlled Afghanistan was the only true Muslim nation in the world.

In 2010, bin Laden threatened in a new audio message with killing French citizens in retaliation for France's support for the United States in the war in Afghanistan and because the European country will ban women from the use of the Muslim veil.

Over time, bin Laden settled into a compound near Abbottabad, Pakistan. Eventually, the Americans learned of bin Laden's whereabouts, and a strike team was assembled to go after him.

The CIA launched a mission, "Operation Neptune Spear", where United States Special Operation forces raided bin Laden's hideout compound. At around 01:00 Pakistan Standard Time, 2 May 2011 (UTC 20:00, 1 May), bin Laden was killed by bullets to the chest and head. DNA confirmed that it was his body. Additionally, photographs were taken of the body to confirm that it was Osama to senior officials, these photographs were not released to the public in order to keep from inflaming sentiment against the US. In order to keep bin Laden's burial site from becoming a place of pilgrimage for extremists, bin Laden was buried at sea within a few hours of his death.

Retrieved from "https://reallifevillains.miraheze.org/w/index.php?title=Osama_bin_Laden&oldid=157530"
Categories:
Cookies help us deliver our services. By using our services, you agree to our use of cookies.