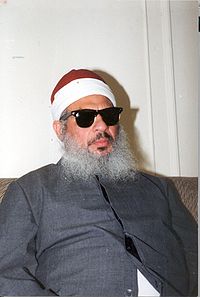 Omar Abdel Rahman, also known as "The Blind Sheikh," (3 May 1938 - 18 February 2017), was a blind Egyptian Muslim who was currently serving a life sentence in the FMC Medical Center Butner. He is also been accused of being the leader of al-Gama'a al-Islamiyya a militant Islamist group in Egypt considered a terrorist group by the United States and Europe.

Retrieved from "https://reallifevillains.miraheze.org/w/index.php?title=Omar_Abdel_Rahman&oldid=127163"
Categories:
Cookies help us deliver our services. By using our services, you agree to our use of cookies.