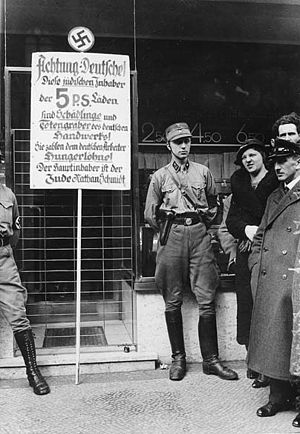 The Night of the Long Knives was a political purge that took place in Nazi Germany between June 30 and July 2, 1934, when the Nazi Party regime of Adolf Hitler carried out a series of political murders. The primary instruments of Hitler's action, which carried out most of the killings, were the Schutzstaffel (SS) paramilitary force under Heinrich Himmler and its Security Service (SD), and Gestapo (secret police) under Reinhard Heydrich. Hermann Göring's personal police battalion also took part in the killings.

Leading figures of the left-wing Strasserist faction of the Nazi Party, along with its figurehead, Gregor Strasser, were murdered, as were prominent conservative anti-Nazis (such as former Chancellor Kurt von Schleicher and Gustav Ritter von Kahr, who had suppressed Hitler's Beer Hall Putsch in 1923). Many of those killed were leaders of the Sturmabteilung (SA), the paramilitary brownshirts.

Adolf Hitler moved against the SA and its leader, Ernst Röhm, because he saw the independence of the SA and the penchant of its members for street violence as a direct threat to his newly gained political power. Hitler also wanted to conciliate leaders of the Reichswehr, the official German military who feared and despised the SA—in particular Röhm's ambition to absorb the Reichswehr into the SA under Röhm's leadership. Additionally, Hitler was uncomfortable with Röhm's outspoken support for a "second revolution" to redistribute wealth. (In Röhm's view Hitler's election had accomplished the "nationalistic" revolution but had left unfulfilled the "socialistic" motive in National Socialism.) Finally, Hitler used the purge to attack or eliminate critics of his new regime, especially those loyal to Vice-Chancellor Franz von Papen, as well as to settle scores with old enemies.

At least 85 people died during the purge, although the final death toll may have been in the hundreds, with high estimates running from 700 to 1,000. More than a thousand perceived opponents were arrested. The purge strengthened and consolidated the support of the military for Hitler. It also provided a legal grounding for the Nazis, as the German courts and cabinet quickly swept aside centuries of legal prohibition against extrajudicial killings to demonstrate their loyalty to the regime. The Night of the Long Knives was a turning point for the German government. It established Hitler as the supreme administrator of justice of the German people, as he put it in his July 13 speech to the Reichstag.

Retrieved from "https://reallifevillains.miraheze.org/w/index.php?title=Night_of_the_Long_Knives&oldid=126147"
Categories:
Cookies help us deliver our services. By using our services, you agree to our use of cookies.