Ngô Đình Diệm (3 January 1901 – 2 November 1963) was a Vietnamese politician. He was the final prime minister of the State of Vietnam (1954–55), and then served as President of South Vietnam from 1955 until he was deposed and assassinated during the 1963 military coup.

Diệm has been a controversial historical figure in the historiography on the Vietnam War. Some historians have considered him a tool of the United States, while others portrayed him as an avatar of Vietnamese tradition. Some recent studies have portrayed Diệm from a more Vietnamese-centred perspective as a competent leader focused on nation-building and the modernization of South Vietnam.

Diem was born into one of the noble families of Vietnam. His ancestors in the 17th century had been among the first Vietnamese converts to Roman Catholicism. He was on friendly terms with the Vietnamese imperial family in his youth, and in 1933 he served as the emperor Bảo Đại’s minister of the interior. However, he resigned that same year in frustration at French unwillingness to countenance his legislative reforms. Relinquishing his titles and decorations, Diem spent the next 12 years living quietly in Hue.

In 1945 he was captured by the forces of the Communist Party of Vietnam. Their leader, Hồ Chí Minh, invited Diem to join his independent government in the newly declared Democratic Republic of Vietnam (North Vietnam), hoping that Diem’s presence would win Catholic support. Diem rejected the proposal, however, and went into self-imposed exile, living abroad for most of the next decade.

In 1954 Diem returned at Bao Dai’s request to serve as prime minister of a U.S.-backed government in what in the following year would be proclaimed as the Republic of Vietnam (South Vietnam). Diem defeated Bao Dai in a government-controlled referendum in October 1955, ousted the emperor, and made himself president of South Vietnam.

Diem refused to carry out the 1954 Geneva Accords, which had called for free elections to be held throughout Vietnam in 1956 in order to establish a national government. With the south tore by dissident groups and political factions, Diem established an autocratic regime that was staffed at the highest levels by members of his own family.

The country of Vietnam, which held a referendum in South Vietnam, in 1955 deposed Head of State Bao Dai and appointed Prime Minister Ngo Dinh Diem as head of state. The referendum was accused of fraud as in Saigon, Ngo Dinh Diem got 605,025 votes while the country had only around 450,000 registered voters.

Ngo Dinh Diem also ordered the demolition of the resistance monuments and the leveling of the Viet Minh martyrs' cemetery during the Indochina War, an act of grave insult to Vietnamese worship practices. According to the Nhan Dan newspaper, since the end of 1954, under the order of the United States, the government of Ngo Dinh Diem provoked bloody massacres in Ngan Son, Chi Thanh, Cho Duoc, Mo Cay, Cu Chi, Binh Thanh. From May 1955 to May 1956, Ngo Dinh Diem launched the first phase "plus denominator campaign" throughout the South; 6-1955, opened the Thoai Ngoc Hau campaign to sweep the areas that used to be a resistance against the French Viet Minh base. The Government of the Republic of Vietnam carried out the campaign of communist accusations, communist extermination, interdisciplinary defense, and consolidation of people to form strategic hamlets. According to the 1956 Constitution, President Ngo Dinh Diem has full power to destroy or paralyze laws with which he does not agree, as well as to easily enact and enforce laws that are beneficial to him. Furthermore, the Constitution states that people have a "mission" before "the Creator", so many people believe that this proves the government's bias towards Christianity while other religions are not mentioned. This fraudulent judicial body was managed, it was drafted by the diem himself in which he personally assigned five of the nine judges who decided which laws were constitutional or not. On January 9, 1956, Ngo Dinh Diem issued Decree No. 4 to cancel the Buddha's birthday from the list of school holidays. This causes discontent in public opinion in general and in the Buddhist community of the country.

Vietnamese people, as well as historical circumstances. The harshest measures were applied, for example, on August 16, 1954, the army of the Republic of Vietnam opened fire to suppress protesters in the city of Go Cong, shooting and killing 8 people and wounding 162 people. Between 1955 and 1960, according to the Republic of Vietnam, 48,250 people were imprisoned, according to another source, about 24,000 people were injured, 80,000 were executed or killed, 275,000 were imprisoned. imprisoned, interrogated with or without torture, and around 500,000 were sent to concentration camps. 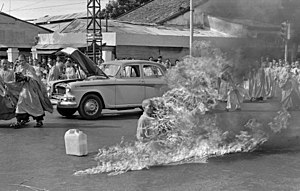 This distorted the social model, reduced the people's trust in the Ngo Dinh Diem government, and pushed the resistance (Viet Minh) into the forest to form a war zone. The Viet Minh responded with protests demanding the release of their officers or organizing vicious exterminations: the murder of government personnel of Ngo Dinh Diem and his collaborators were described as "cruel and spies". To increase intimidation, the South Vietnamese Republic used the guillotine to execute the prisoners. Many murder cases in the Republic of Vietnam were carried out publicly in front of the public and the heads of the prisoners were removed to warn them. The Straits Times (Singapore) of July 24, 1959, published an article reporting on about 1,000 people who saw the massacre in Saigon. The Morning Newspaper (Saigon) of October 15, 1959, wrote: In the absence of the Special Military Tribunal on October 2, Nguyen Van Lep, or Tu Ut Lep, a Viet Cong, was sentenced to death. A week ago, Lep got caught in a police net in a forest in Tay Ninh. The death sentence has been carried out.

Currently, the Hao Duoc commune council has made public the head and liver of the condemned man. On May 6, 1959, the National Assembly of the Republic of Vietnam passed Law No. 91 called Law 10-59, later signed by the President of the Republic of Vietnam, Ngo Dinh Diem. This law provides for the organization of special military tribunals on the basis of "adjudication of war crimes against the Republic of Vietnam", in order to purge the communists in South Vietnam. According to law 10-59, the accused can be brought to trial without the need to open an investigation, the sentence is only of two levels: death or torture, the trial lasts 3 days is maximum, no amnesty or appeal; the death penalty instrument also includes a guillotine. After the promulgation of this law, the revolutionary forces of the South were heavily persecuted, arrested, and persecuted by the Diem government, especially the members of the Communist Party, so the force suffered great losses.

Simultaneous attacks were carried out throughout the Republic of Vietnam, Tu Dam pagoda in Hue was looted, the statue of the Buddha of Tat-da-kai was destroyed and the body of a deceased monk was also taken go. When the people came to protect the monks, they clashed with the army and police, resulting in 30 civilians dead and 200 injured. A total of 1,400 monks were arrested, about 30 were injured throughout the territory of the Republic of Vietnam. The United States showed disapproval of the Diem government when the US ambassador Henry Cabot Lodge, Jr. No more Buddhist protests occurred during the remaining tenure of Ngo Dinh Diem (about 5 months). During this time, Ngo Dinh Diem's ​​sister-in-law Tran Le Xuan, a former Buddhist and converted to Catholicism, could consider Trần Lệ Xuân the first lady de facto (in fact) led by Ngo. Dinh Diem is not married; Trần Lệ Xuân added oil to the fire while mocking the monks' self-immolations, treating them as "barbecues", and declaring "If the Buddhists want more barbecue, I will be delighted. If the Buddhists want to have another barbecue, I will be glad to supply the gasoline. Attacks on temples have sparked widespread anxiety in Saigon's public. Saigon University students deregulated and organized riots, leading to arrest, imprisonment and closing of the university; this was repeated at Hue University. When high school students marched to protest, Ngo Dinh Diem also arrested the students; More than 1,000 students from high schools in Saigon, mostly children of Saigon civil servants, have been sent to re-education camps, reportedly including five-year-olds, accused of painting and writing anti-government sentences and drawings. Diem's ​​foreign minister, Vu Van Mau, resigned, shaved his head like a monk in protest. When he tried to leave the Republic of Vietnam to join a pilgrimage to Indian Buddhist lands, he was arrested and placed under house arrest. On August 20, 1963, Ngo Dinh Nhu directed the security forces of Colonel Le Quang Tung to launch the campaign of Nuoc Flood to attack Xa Loi, Giac Minh, An Quang, Tu Quang, Therevada pagodas in Saigon and Temples nationwide. They wear military uniforms during the raid to show everyone that the Government Army is behind them in this persecution. Ngo Dinh Nhu's forces arrested more than 400 monks sitting in front of the Buddha statue. Thousands of other Buddhists were also arrested across the country (1,400 people in Saigon alone) on the grounds that "Buddhism is henchmen of the Viet Cong". The immediate consequence of the Flood campaign was that the entire Buddhist leadership was arrested, and the Buddhist movement was almost paralyzed. In the three months following the Flood campaign, many world leaders, including Pope Paul VI and Catholic organizations, condemned Ngo Dinh Diem. Ngo Dinh Thuc went to the Vatican but was not received by the Pope, Tran Le Xuan led a National Assembly delegation abroad to protest against the protest. In late September 1963, the United Nations Organization decided to send a delegation to Vietnam to investigate the persecution of Buddhism at the invitation of the Republic of Vietnam.

Diem, assisted by U.S. military and economic aid, was able to resettle hundreds of thousands of refugees from North Vietnam in the south, but his own Catholicism and the preference he showed for fellow Roman Catholics made him unacceptable to Buddhists, who were an overwhelming majority in South Vietnam. Diem never fulfilled his promise of land reforms, and during his rule communist influence and appeal grew among southerners as the communist-inspired Việt Cộng, launched an increasingly intense guerrilla war against his government. The military tactics Diem used against the insurgency were heavy-handed and ineffective and served only to deepen his government’s unpopularity and isolation. 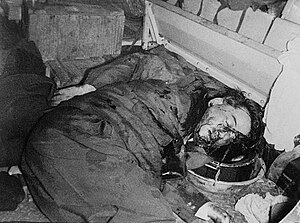 Diem’s imprisoning and, often, killing of those who expressed opposition to his regime—whom he alleged were abetting communist insurgents—further alienated the South Vietnamese populace, notably Buddhists, who increasingly protested Diem’s discrimination against them. Matters with the Buddhists came to a head in 1963 when, after government forces killed several people at a May rally celebrating the Buddha’s birthday, Buddhists began staging large protest rallies, and three monks and a nun immolated themselves. Those actions finally persuaded the United States to withdraw its support from Diem, and his generals assassinated him during a coup d’état.

Diệm's assassination led to the collapse of his regime and the end of the First Republic of Vietnam. Nevertheless, Diệm's contribution over his nine years of power from 1954 to 1963 can be appreciated at many levels due to his part in resolving the northern refugees' issue, establishing and consolidating the power of his regime, subduing the sects, and pacifying the country, Diệm stabilized an independent South Vietnam that had suffered in the first Indochina war and built a relatively stable government in Saigon during the late 1950s. The normalcy and domestic security created conditions for economic recovery and development of education in South Vietnam, which contributed to educated human resources to serve the nation.

Many universities were established during Diệm's presidency, such as Huế University, Đà Lạt University, University of Pedagogy, the University of Saigon, University of Agriculture and Forestry, Medical University of Huế, and the National Institute of Administration, which applied the methods of European and American-style vocational schools, contributing to education in the Republic of Vietnam.

Retrieved from "https://reallifevillains.miraheze.org/w/index.php?title=Ngô_Đình_Diệm&oldid=126530"
Categories:
Cookies help us deliver our services. By using our services, you agree to our use of cookies.