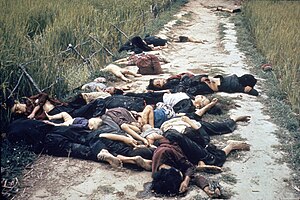 The My Lai Massacre was an event happening in the village of My Lai in Vietnam during the Vietnam War. The US Soldiers were killing unarmed, innocent seniors, pregnant women, and children. The US soldiers go further to rape innocent women. This event was so shocking, it gave US Soldiers a very bad name during the anti-war movement in the 1960s and it even set an example for bad military conduct during that time period. The most ironic part is that this all occurred in South Vietnam, which are allies to the United States. Twenty-six soldiers were charged with criminal offenses, but only Lieutenant William Calley, a platoon leader in C Company, was convicted. Found guilty of killing 22 villagers, he was originally given a life sentence, but served only three and a half years under house arrest. It is arguably the most infamous war crime perpetrated by the United States during the Vietnam War.

File:Pete Seeger - Last Train to Nuremberg
"Last Train to Nuremberg" by Pete Seeger, a protest song about the Vietnam War specifically about the My Lai Massacre.
Retrieved from "https://reallifevillains.miraheze.org/w/index.php?title=My_Lai_Massacre&oldid=118189"
Categories:
Hidden category:
Cookies help us deliver our services. By using our services, you agree to our use of cookies.