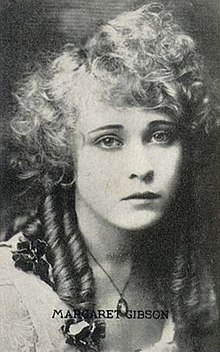 Ella Margaret Gibson (September 14, 1894 – October 21, 1964) was an American actress. She appeared in over 140 films during her career, sometimes under false names.

While on her deathbed, she confessed to the unsolved murder of William Desmond Taylor.

By her own account, Gibson's parents had worked in show business. She began her stage career at the age of 12, apparently when her father left and she remained as the sole means of support for her mother. Gibson appeared on the Pantages Vaudeville Circuit for over two years.

In 1923 Gibson was arrested for involvement in an alleged nationwide blackmail and extortion ring. Despite the charges being dropped, many people believe that she was, in fact, guilty.

On October 21, 1964, while still living in Hollywood, Gibson suffered a heart attack at her home. Realizing that she was about to die, she asked for a priest and then confessed that she had murdered a film director, William Desmond Taylor, who had been shot dead several years ago. Her confession does not conflict with the historical record of the event. In fact, the case's primary witness reported that the murderer may have been a woman in men's clothes. It is also reported that Gibson became hysterical after seeing a documentary about the murder.

Retrieved from "https://reallifevillains.miraheze.org/w/index.php?title=Margaret_Gibson&oldid=108760"
Categories:
Cookies help us deliver our services. By using our services, you agree to our use of cookies.