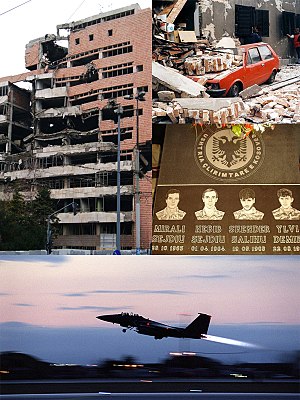 The Kosovo War was an armed conflict in Kosovo that started in February 1998 and lasted until 11 June 1999. It was fought by the forces of the Federal Republic of Yugoslavia (i.e. Serbia and Montenegro), which controlled Kosovo before the war, and the Kosovo Albanian rebel group known as the Kosovo Liberation Army (KLA), with air support from the North Atlantic Treaty Organisation (NATO) from 24 March 1999. It was the fourth of the Yugoslav Wars (fifth if one counts the Croat-Bosniak War), taking place 3 years after the end of the Bosnian War.

The KLA, formed in the early 1990s to fight against Serbian persecution of Kosovo Albanians, initiated its first campaign in 1995 when it launched attacks against Serbian law enforcement in Kosovo. In June 1996 the group claimed responsibility for acts of sabotage targeting Kosovo police stations, during the Kosovo Insurgency.

In 1997, the organisation acquired a large amount of arms through weapons smuggling from Albania, following a rebellion in which weapons were looted from the country's police and army posts. In early 1998, KLA attacks targeting Yugoslav authorities in Kosovo resulted in an increased presence of Serb paramilitaries and regular forces who subsequently began pursuing a campaign of retribution targeting KLA sympathisers and political opponents; this campaign killed 1,500 to 2,000 civilians and KLA combatants.

After attempts at a diplomatic solution failed, NATO intervened, justifying the campaign in Kosovo as a "humanitarian war". This precipitated a mass expulsion and ethnic cleansing of Kosovar Albanians as the Yugoslav forces continued to fight during the aerial bombardment of Yugoslavia.

By 2000, investigations had recovered the remains of almost three thousand victims of all ethnicities, and in 2001 a United Nations administered Supreme Court, based in Kosovo, found that there had been "a systematic campaign of terrorism and war crimes; this included murders, rapes, arsons and severe maltreatments", but that Yugoslav troops had tried to remove rather than eradicate the Albanian population.

The war ended with the Kumanovo Treaty, with Yugoslav and Serb forces agreeing to withdraw from Kosovo to make way for an international presence. After the war, a list was compiled which documented that over 13,500 people were killed or went missing during the two year conflict.The Yugoslav and Serb forces caused the displacement of between 1.2 million to 1.45 million Kosovo Albanians.

After the war, around 200,000 Serbs, Romani, and other non-Albanians fled Kosovo and many of the remaining civilians were victims of abuse. Serbia became home to the highest number of refugees and internally displaced persons in Europe.

The NATO bombing campaign has remained controversial, as it did not gain the approval of the UN Security Council and because it caused at least 488 Yugoslav civilian deaths, including substantial numbers of Kosovar refugees.

Slobodan Milošević was indicted by the International Criminal Tribunal for the Former Yugoslavia (ICTY) for war crimes, genocide, and crimes against humanity perpetrated during the Kosovo War (as well as the wars in Bosnia and Croatia.) He remained in the ICTY's custody until his death in 2006, without ever formally being convicted for his role in the wars.

Retrieved from "https://reallifevillains.miraheze.org/w/index.php?title=Kosovo_War&oldid=161374"
Categories:
Cookies help us deliver our services. By using our services, you agree to our use of cookies.