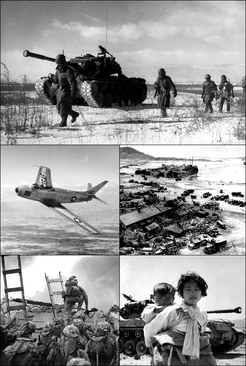 The Korean War (in South Korean Korean: 한국전쟁; Hanja: 韓國戰爭; RR: Hanguk Jeonjaeng, "Korean War"; in North Korean Korean: 조국해방전쟁; Hanja: 祖國解放戰爭; MR: Choguk haebang chŏnjaeng, "Fatherland Liberation War"; 25 June 1950 – 27 July 1953) was a war between North Korea (with the support of the Communist Party of China and the Soviet Union) and South Korea (with the support of the United Nations, principally from the United States). The war began on 25 June 1950 when North Korea invaded South Korea following a series of clashes along the border.

As a product of the Cold War, the Soviet Union and the United States divided Korea into two sovereign states in 1948 with the border set at the 38th parallel. A socialist state was established in the north under the communist leadership of Kim Il-sung and his Workers' Party of Korea and a capitalist state in the south under the anti-communist leadership of Syngman Rhee. Both governments of the two new Korean states claimed to be the sole legitimate government of all of Korea, and neither accepted the border as permanent. The conflict escalated into warfare when North Korean military (KPA) forces—supported by the Soviet Union and China—crossed the border and advanced into South Korea on 25 June 1950. The United Nations Security Council authorized the formation of the United Nations Command and the dispatch of forces to Korea to repel what was recognized as a North Korean invasion. Twenty-one countries of the United Nations eventually contributed to the UN force, with the United States providing around 90% of the military personnel.

After the first two months of the war, the ill-equipped and underprepared South Korean Army (ROKA) and the US forces rapidly dispatched to Korea were on the point of defeat. As a result, the ROKA and US troops retreated to a small area behind a defensive line known as the Pusan Perimeter. In September 1950, an amphibious UN counter-offensive was launched at Incheon and cut off many KPA troops in South Korea. Those who escaped envelopment and capture were forced back north. UN forces invaded North Korea in October 1950 and moved rapidly towards the Yalu River—the border with China—but on 19 October 1950, Chinese forces of the People's Volunteer Army (PVA) crossed the Yalu and entered the war. The surprise Chinese intervention triggered a retreat of UN forces back below the 38th Parallel by late December.

In these and subsequent battles, Seoul changed hands four times, and the last two years of fighting became a war of attrition, with the front line close to the 38th Parallel. The war in the air, however, was never a stalemate. North Korea was subject to a massive U.S. bombing campaign. Jet fighters confronted each other in air-to-air combat for the first time in history, and Soviet pilots covertly flew in defense of their communist allies.

The fighting ended on 27 July 1953, when the Korean Armistice Agreement was signed. The agreement created the Korean Demilitarized Zone (DMZ) to separate North and South Korea and allowed the return of prisoners. However, no peace treaty was ever signed, and the two Koreas are technically still at war, engaged in a frozen conflict. In April 2018, the leaders of North and South Korea met at the DMZ and agreed to work towards a treaty to formally end the Korean War.

The Korean War was among the most destructive conflicts of the modern era, with approximately 3 million war fatalities and a larger proportional civilian death toll than World War II or the Vietnam War. It incurred the destruction of virtually all of Korea's major cities, thousands of massacres by both sides (including the mass killing of tens of thousands of suspected communists by the South Korean government), and the torture and starvation of prisoners of war by the North Korean command. North Korea became among the most heavily bombed countries in history, this war is ended by Dwight D. Eisenhower but it still a ongoing war to this day.

Retrieved from "https://reallifevillains.miraheze.org/w/index.php?title=Korean_War&oldid=153385"
Categories:
Cookies help us deliver our services. By using our services, you agree to our use of cookies.