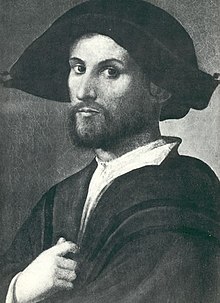 Giovanni Borgia, 2nd Duke of Gandía (1474 or 1476–1497) was the son of Pope Alexander VI a member of the House of Borgia who was murdered in 1497. He was the brother of Cesare, Gioffre, and Lucrezia Borgia. Giovanni, commonly known as Juan (or sometimes, Joan), is believed to be the eldest of the Pope's four children by Vannozza dei Cattanei,[2][3] but this is disputed. Due to the contents of a number of papal bulls issued after his murder, it is unclear whether Giovanni was born in 1474 or 1476.

Retrieved from "https://reallifevillains.miraheze.org/w/index.php?title=Juan_Borgia&oldid=125180"
Categories:
Cookies help us deliver our services. By using our services, you agree to our use of cookies.