Josef Mengele (March 16th, 1911 – February 7th, 1979) was an officer of the Schutzstaffel and a Nazi Party doctor employed at the Auschwitz Birkenau concentration camp during World War II. He was known for conducting horrific experiments on the prisoners at the camps. His experiments were considered to be among the most heinous war crimes perpetrated by the Nazis during the Holocaust.

He conducted terrible experiments on prisoners that earned him the nickname "the Angel of Death". Some of Mengele's victims were children (mainly identical twins), further adding to his infamy. His experiments involved torture, unnecessary amputations, deliberately infecting subjects with infectious diseases, mutilation, dismemberment, and dissections.

Mengele's research subjects were better fed and housed than the other prisoners, and temporarily spared from execution in the gas chambers. He established a kindergarten for children who were the subjects of his experiments, as well as the preschool children from the Romani camp. The facility provided better food and living conditions than other areas of the camp, and included a children's playground. When visiting his young subjects, he introduced himself as "Uncle Mengele" and offered them sweets, while at the same time being personally responsible for the deaths of an unknown number of victims whom he killed via lethal injection, shootings, beatings, and his deadly experiments.

Mengele has been described as sadistic, lacking empathy, and extremely antisemitic, believing the Jews should be eliminated entirely as an inferior and dangerous race. Rolf Mengele, who visited him in 1977 later claimed that his father had shown no remorse for his wartime activities.

Mengele's experimentation was part of a wider network of such atrocities that were committed by so-called "doctors" and "scientists" during this time, taking advantage of the Holocaust to further their own unethical projects.

Following the end of the Third Reich and with the help of his family, he fled from Argentina to Paraguay, and later to Brazil following the capture of Adolf Eichmann in 1960. While in Paraguay, it is rumored that he personally received protection from President Alfredo Stroessner himself. 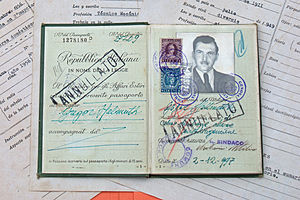 Josef Mengele suffered a stroke while swimming and died on February 7th, 1979 - aged 67, having managed to evade numerous manhunts performed after WWII to try and capture former Nazis (especially those involved in the Holocaust).

Mengele's experiments were made into a movie known as The Human Centipede. The movie shows how his experiments looked in real life.

Retrieved from "https://reallifevillains.miraheze.org/w/index.php?title=Josef_Mengele&oldid=160947"
Categories:
Cookies help us deliver our services. By using our services, you agree to our use of cookies.