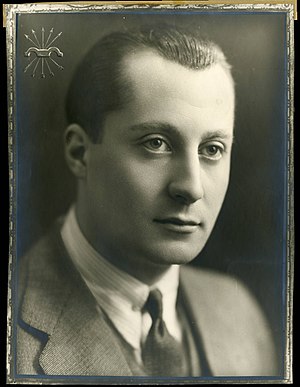 Jose Antonio Primo de Rivera (April 23, 1903 - November 20, 1936) was a Spanish lawyer, nobleman, politician, and founder of the Falange Española ("Spanish Phalanx"). He was executed by the Spanish republican government during the course of the Spanish Civil War.

José Antonio Primo de Rivera was born in Madrid on April 24, 1903, the oldest son of General Miguel Primo de Rivera, Prime Minister and Dictator under the monarchy of King Alfonso XIII of Spain. From his father he inherited the title of Marquis of Estella (Navarre). He never married.

His mother died when he was five years old, and he was subsequently raised by his father's sister. He was privately taught at home, and learned English and French. When at university, he did not attend lectures until the second year of his undergraduate studies. He spent his summer holidays in the country estate of an uncle where he practiced horse riding and hunting.

Primo de Rivera went on to study law at the University of Madrid between 1917 and 1923. He helped to organize the student union there, "Federación Universitaria Escolar," which opposed the higher-education policies of his father. He took undergraduate and graduate courses simultaneously and he obtained both his Bachelor and Doctor degrees in the same year, 1923.

After graduating he picked the "One-Year Volunteer" option to do his military service while his father was dictator. He served with the Ninth Dragoons of St. James cavalry regiment stationed at Barcelona. He was court-martialed for punching a superior officer, Brigadier General Gonzalo Queipo de Llano.

The tribunal meted out a very lenient sentence, the temporary demotion from the rank of second lieutenant.[citation needed]

In 1925 he became a registered lawyer and opened an office on a side street of Madrid very near the confluence of three principal avenues.[6] In 1931 he was invested "Perpetual Dean of the Illustrious College of Lawyers of Madrid."

In 1931 he constituted "Agrupación al Servicio de la República" (Assembly at the Service of the Republic) and paradoxically ran for office under the monarchist banner of "Unión Monárquica Nacional";—he failed to get elected.

He was detained briefly in 1932 for collaboration in General Sanjurjo's attempted coup.

On October 29, 1933, he launched Falange Española ("Spanish Phalanx"), a nationalist party inspired by Fascism. The foundational convention was held in the Theatre of Comedy of Madrid. He was the keynote speaker and his first address was a criticism of liberal democracy.

Since the liberal state was a servant of [Rousseau] it became not just the trustee of a nation's destiny but also the spectator of electoral contests. What alone mattered to the liberal state was that a certain number of gentlemen be sitting at the polling station, that the voting start at eight o'clock and end at four, that the ballot boxes not get smashed—when being smashed is the noblest aspiration of all ballot boxes—and then to respect the outcome of the voting, as if the outcome was a matter of complete indifference to it. In other words liberal governments did not even believe in their mission, that theirs was a respectable duty, but rather they believed that anyone who disagreed with them and decided to attack the state, whether with good or ill intentions, had the same right as they did to defend it.

During the speech he made his noted remark on the recourse to fists and guns when needed,

And in closing, that if what we want must in some circumstance be attained through the use of violence, that we demur not before the prospect of violence. For who has said, when they say, "Every available means except violence," that the supreme hierarchy of moral values resides in kindness? Who has said that when our feelings are insulted, rather than react like men, we are called upon to reply amiably? Dialogue as a first step of communication is well and good. But there is no option left except fists and guns when someone offends the precepts of justice or the fatherland.

His closing words made explicit his romanticism.

In a poetic sweep we will raise this fervent devotion to Spain; we will make sacrifices, we will renounce the easy life and we will triumph, triumph that—you know this well—we shall not obtain in the upcoming elections. In these elections vote the lesser evil. But your Spain will not be born out of them, nor does our frame for action reside there. That is a murky atmosphere, spent, like a tavern's after a night of dissipation. Our station is not there. I am a candidate, yes, but I take part in these elections without faith or respect. And I say this now, when so doing may rest me every vote. I couldn't care less. We are not going to squabble with the establishment over the unsavory left-overs of a soiled banquet. Our station is outside though we may provisionally pass by the other one. Our place is out in the clear air, beneath a moonlit sky, cradling a rifle, and the stars overhead. Let the others party on. We outside in tense vigil; earnest and self-confident we divine the sunrise in the joy of our hearts.

He was a candidate in the general election of 19 November for the umbrella organization "Unión Agraria y Ciudadana," part of the broad conservative coalition Confederación Española de Derechas Autónomas (CEDA). He was elected to the Parliament as a representative of Cadiz.

In his first parliamentary intervention he answered Gil Robles—the founder of CEDA—who had just spoken out against all totalitarian forms of government for arrogating themselves the attributes of God and crushing the personality of the individual:

We believe that the state does not have to justify its behaviour at every turn, just as no individual or social class does, in so far as it holds to a guiding principle all the time. All the while the state is made out to be God by Rousseau's idea that the state, or the will of those it represents, is always right. What makes the state like God is the belief that the will of the state, embodied by absolute monarchs in the past and now by the popular vote, is always right. The monarch may have erred; the popular vote may err because neither truth nor goodness derives from an act or assertion of the will. Goodness and truth are perennial tributaries of reason, and to ascertain whether one is in the right it is not enough to ask the king—whose dictate seemed always just to his supporters—nor enough to canvass the people—whose decision is always right according to the disciples of Rousseau. What must be done rather is to verify whether our actions and our thoughts are in agreement at every step with a permanent aspiration.

With his approval, Falangists attacked on the Jewish-owned SEPU department stores in the spring of 1935. He shared with other rightists the belief that violence was legitimate against a Republic that he perceived as influenced by Jews and Freemasons. In the general election of February 16, 1936, Falange won only 0.7% of the vote; but the wave of instability which greeted the victory of the Popular Front—a left-wing coalition of Communists, Socialists, liberal Republicans like the Radicals, and others—caused an influx of new members, and the minuscule party grew to more than 40,000 members by July.

Primo de Rivera created several Falangist symbols. The Falangist uniform was a blue shirt with the embroidered design of a yoke (a symbol for farming) plus a backdrop of five vertical arrows (a symbol for war), copied from the heraldry of the Catholic Monarchs. The cap was the red beret of the Carlists. The flag bore the red and black colours of the Anarchists. The salute was the Roman salute. In casual conversation Falangists were expected to overlook rank and to call one another "Comrade." In 1935 Primo de Rivera collaborated in editing the lyrics of the Falangist anthem, "Cara al Sol" (Face to the Sun).

Every member of Falange had to obey unquestioningly. They were told:

The honour and task of Falange must be gauged by those who carry the burden of leadership on their shoulders. Do not forget that one of the rules of our code of ethics is to have faith in the leaders. Your leaders are always right.

Retrieved from "https://reallifevillains.miraheze.org/w/index.php?title=Jose_Antonio_Primo_de_Rivera&oldid=39661"
Categories:
Cookies help us deliver our services. By using our services, you agree to our use of cookies.