John Wayne Gacy Jr. (March 17th, 1942 – May 10th, 1994) was an American serial killer and rapist who sexually assaulted and murdered at least 33 teenage boys and young men between 1972 and 1978. Gacy buried 26 of his victims in the crawlspace of his home, buried three others elsewhere on his property, and discarded the remains of his last four known victims in a nearby river. He was convicted of 33 murders and sentenced to death for 12 of these killings in March 1980. He was executed on May 10th, 1994 by lethal injection.

Gacy later became known as the "Killer Clown" due to his charitable services at fundraising events, parades and children's parties where he would dress as "Pogo the Clown", a character he devised himself.

Gacy was born into Chicago Illinois on March 17, 1942 to a blue-collar family. The son of Danish and Polish parents, Gacy and his siblings grew up with an ex-military, strict and abusive alcoholic father who would beat the children with a razor strap if they were perceived to have misbehaved. His father physically assaulted Gacy's mother as well. Gacy's sister Karen would later say that the siblings learned to toughen up against the beatings, and that Gacy would not cry. Gacy suffered further alienation at school, unable to play with other children due to a congenital heart condition that was looked upon by his father as another failing. He later realized he was attracted to men, and experienced great turmoil over his sexuality.

Birth of the devil inside him

Growing up, Gacy exhibited a growing tendency toward sadism and paraphilia which resulted in several encounters with the law in the 1960s. In 1968, after his conviction for sexually assaulting a teenage boy, he was confined in the Iowa State Men’s Reformatory (Anamosa State Penitentiary) and forced to undergo psychological evaluation. After his release in 1970 and while still on parole, he was again arrested for sexual assault, but the charges were later dropped. Gacy then became a fairly successful independent contractor and bought a house in suburban Chicago.

The tortures that Gacy infringed on his captives included drowning them repeatedly in his bathtub, throwing burning poker cards on their torsos, as well as spilling hot wax on them. As part of the dominion he could exert on his victims, Gacy allowed himself the luxury of urinating on them.

In 1978, after one of Gacy’s victims, Robert Piest, was reported missing, police learned that Gacy was the last person known to have seen him. After obtaining a search warrant, police discovered the bodies of 29 boys and young men in or near Gacy’s house; four other bodies were found in the nearby Des Plaines River. Indeed, the area of the house had emitted a foul stench for years, but Gacy had told his houseguests and his wife that the smell was the result of moisture buildup.

On February 6, 1980, Gacy's trial began in Chicago. During the trial, he pleaded not guilty, alleging mental problems. However, his testimony was flatly rejected, since mental studies were carried out, giving negative results, that is, he did not have or suffer from mental problems. . His lawyer argued that John had lapses of temporary insanity at the time of each murder, but before and after, he regained his normalcy to attract and dispose of victims. At one point in the trial, Gacy's defense tried to claim that all 33 murders were accidental deaths as part of erotic asphyxiation, but the Cook County Coroner demonstrated with evidence that these claims were impossible. Furthermore, Gacy had already confessed to the police and was unable to suppress such evidence. John Wayne Gacy was found guilty on March 13 and was sentenced to 21 life sentences and 12 death sentences.

In the hours leading up to Gacy's execution, a crowd estimated at more than 1,000 gathered outside the correctional center; most of whom were fervently in favor of execution, although several protesters against the death penalty were also present. Some of the supporters of the execution wore t-shirts that alluded to the previous community services of Gacy as a clown and that carried satirical slogans such as "There are no tears for the clown." Protesters against the death penalty present watched a silent candlelight vigil. 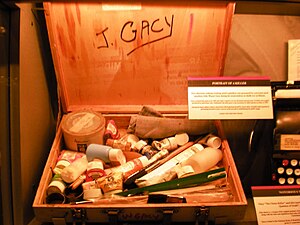 On May 10th, 1994; Gacy was executed for his crimes and his execution was a major event with protesters from both sides of the argument attending, some displeased with the death-penalty and others gathering to taunt the serial-killer. He never expressed remorse, and his last words were: "Kiss my ass! You'll never find the rest!".

After his death, Gacy's brain was removed and given to Dr. Helen Morrison, who was researching psychopaths. No abnormalities were found in his brain.

John Norman was a American pedophile, sex offender and sex trafficker. It has been widely speculated that Gacy had accomplices due to being out of the state when several of his victims went missing and a surviving victim of his, Jeffrey Rignall being adamant that there was someone else in the house when he was being tortured.

Gacy ran a construction company called PDM, and people speculate that his employees, Michael Rossi and David Cram were his accomplices. Philip Paske, who helped John Norman run the Delta Project sex trafficking ring, was also one of Gacy's employees, being brought in by David Cram as they were acquaintances. This has led to the theory that Gacy and Norman were working together.

When Gacy was pleading his innocence in interviews he named Norman, Paske, Rossi and Cram as the ones responsible for the deaths of the men and teenage boys, although he claimed to have not known Norman, saying "I have yet to see a current picture of him.". People have further theorised that Gacy was always meant to be set up to take up blame for the crimes.

In addition, teenagers believed to have been killed by Gacy, Kenneth Parker and Michael Marino, were last seen alive close to where Norman was living. Norman is also believed to have had connections to serial killer Dean Corll.

Retrieved from "https://reallifevillains.miraheze.org/w/index.php?title=John_Wayne_Gacy&oldid=158956"
Categories:
Cookies help us deliver our services. By using our services, you agree to our use of cookies.