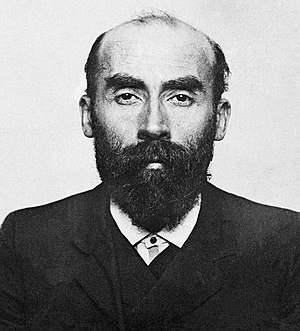 Landru began to put advertisements in the lonely hearts sections in Paris newspapers, usually along the lines of "Widower with two children, aged 43, with comfortable income, serious and moving in good society, desires to meet widow with a view to matrimony." With World War I under way, many men were being killed in the trenches, leaving plenty of widows upon whom Landru could prey.

Landru would seduce the women who came to his Parisian villa and, after he was given access to their assets, he would kill them and burn their dismembered bodies in his oven. Between 1914 and 1918, Landru claimed 11 victims: 10 women plus the teenaged son of one of his victims. With no bodies, the victims were simply listed as missing, and it was virtually impossible for the police to know what had happened to them, as Landru used a wide variety of aliases in his schemes. His aliases were so numerous that he had to keep a ledger listing all the women with whom he corresponded and which particular identity he used for each woman.

In 1919, the sister of one of Landru's victims, Madame Buisson, attempted to track down her missing sibling. She did not know Landru's real name but she knew his appearance and where he lived, and she eventually persuaded the police to arrest him. Initially, Landru was charged only with embezzlement. He refused to talk to police, and with no bodies (police dug up his garden, but with no results), there was seemingly not enough evidence to charge him with murder. However, policemen did eventually find various bits of paperwork that listed the missing women, including Madame Buisson, and combining those with other documents, they finally built up enough evidence to charge him with murder.

Landru stood trial on 11 counts of murder in November 1921. He was convicted on all counts, sentenced to death, and guillotined three months later in Versailles. During his trial Landru traced a picture of his kitchen, including in it the stove in which he was accused of burning his victims. He gave this drawing to one of his lawyers, Auguste Navières du Treuil. In December 1967, the drawing was made public. Written in pencil on the back Landru stated, Ce n'est pas le mur derrière lequel il se passe quelque chose, mais bien la cuisinière dans laquelle on a brûlé quelque chose (It is not the wall behind which a thing takes place, but indeed the stove in which a thing has been burned). This has been interpreted as Landru's confession to his crimes.

Retrieved from "https://reallifevillains.miraheze.org/w/index.php?title=Henri_Désiré_Landru&oldid=135902"
Categories:
Cookies help us deliver our services. By using our services, you agree to our use of cookies.