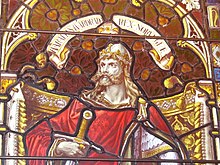 Harald Hardrada (1015 - 1066) was the crazed barbaric Norse Viking ruler of the Viking Horde. He was a known and feared warrior of his time. In the Battle at Stamford Bridge, he was killed trying to take the English crown from Harold Godwinson, and the English, but was killed in 1066. Here, he was joined by Harold's brother, Tostig Godwinson, who had caused the whole ordeal to take place by causing Harald to believe his father's claim to the English throne was still valid. Hardrada had also previously won against the English forces at the Battle of Fulford Gate, where they exected 150 hostages in return for 150 of their own. He was not expecting Harold to be as quick as he was in fighting him and ended up dying from an arrow to the throat, with Tostig dying too. As a result of Hardrada's death, this brought an unfortunate end to the Viking Age. The choice method of execution was the Blood Eagle. The condemned was tied up vertically, sliced open, then the rib cages were ripped outwards, exposing the entrails, then the lungs were exposed out of the body so the condemned would not only bleed, but suffocate to death.

Retrieved from "https://reallifevillains.miraheze.org/w/index.php?title=Harald_Hardrada&oldid=42545"
Categories:
Cookies help us deliver our services. By using our services, you agree to our use of cookies.