Hafizullah Amin (Pashto: حفيظ الله امين‎) (August 1, 1929 – December 27, 1979) was the fourth President of Afghanistan during the period of the communist Democratic Republic of Afghanistan.

Amin tried to broaden his internal base of support and to bring the interest of Pakistan and the United States in Afghan security. During the 104 days of his rule, except for one failed military rebellion, no major uprising took place. Amin also pursued the policy of Pashtunization of the country.

On December 27, 1979, members of the Soviet KGB Alpha Group killed him and Babrak Karmal became President.

Hafizullah Amin was born to a Ghilzai Pashtun family in Paghman on August 1, 1929. He graduated from Kabul University and left for the United States for graduate studies at Columbia University. He then returned to Afghanistan and became a teacher. Hafizullah Amin was also a student of former and highly respected Afghan Parliamentarian Haji Abdul Rasul.

He quickly joined the People's Democratic Party of Afghanistan (PDPA), becoming a prominent member of the Marxist Khalq (People) faction.

President Mohammed Daoud Khan in 1978 was still in the besieged palace when Amin took command of the coup, after he and his comrades were released from the prison.

The PDPA seized power after Daoud's death, with Nur Muhammad Taraki becoming President of the Democratic Republic of Afghanistan and secretary general of the PDPA, while Amin and Babrak Karmal became deputy prime ministers. An attempt to institute Marxist-Leninist reforms provoked widespread resistance and a number of violent revolts.

In February 1979 the US Ambassador Adolph Dubs was killed. The Khalq faction was gaining political power over the Parcham faction, with Karmal exiled to Europe. Amin had gained considerable control by March 1979 and was named Prime Minister although Taraki retained his other posts. The unrest continued however and the regime was forced to seek more Soviet aid. It was in that meeting between Taraki and Leonid Brezhnev that the decision to remove Amin took place.

After Taraki returned to Kabul he requested that Amin meet with him. Amin agreed to the meeting only if his safety was guaranteed by the Soviet Ambassador, Alexander Puzanov. Such assurances were provided, but not in good faith.

Amin however knew Taraki's intentions, and the demand for the ambassador to guarantee his safety was probably a shrewd ploy on the part of Amin to mislead Taraki.

When Amin arrived at the People's Palace, a shootout occurred. Amin escaped unhurt, returned later to the palace with some of his supporters and used the Palace Guard to take Taraki prisoner.

On September 14, 1979 Amin took control of the government. A few days later, Amin's government announced that Taraki died of an "undisclosed illness". A statement made later by the Karmal government stated that on October 8 Amin ordered Taraki killed and that the chief of the palace section of the KAM and two lieutenants tied Taraki up on a bed and suffocated him with a cushion.

His rule was notable for its brutality. The Soviets claimed that perhaps 500 PDPA members had forfeited their lives. Amin now assumed leadership and carried out his own purges of the PDPA. Attempting to pacify the population, he released a list of some 18,000 people who had been executed and blamed the executions on Taraki. The official Afghan figures are much higher-15,000 to 45,000.

Additional to that, Amin was not a popular person. He was rapidly accumulating as enemies a large group of very angry relatives of victims, and PDPA members must have lived in fear of their lives.

During this period, many Afghans fled to Iran and Pakistan and began organizing a resistance movement to the "atheistic" and "infidel" communist regime backed by the Soviets, although the groups organizing in the Pakistani city of Peshawar would later, after the Soviet invasion, be described by the western press as "freedom fighters".

In mid-November 1979 Amin launched a large military operation against the resistance at Sayd Karam in Paktia Province. The offensive was successful, eliminating as many as 1,000 or more resistance fighters, relatives, and supporters, driving most of the remainder into Pakistan, and obliterating sympathetic villages.

Amin also began unfinished attempts to moderate what many Afghans viewed as an Anti-Islam regime. Promising more religious freedom, repairing mosques, presenting copies of the Quran to religious groups, invoking the name of Allah in his speeches, and declaring that the Saur Revolution was "totally based on the principles of Islam." Yet many Afghans held Amin responsible for the regime's harshest measures and the Soviets, worried that their huge investment in Afghanistan might be jeopardized, increased the number of advisers in Afghanistan.

A Western theory suggests that Amin worked to broaden his base of support and purged the PDPA of his perceived enemies. His regime was still under pressure from the insurgency in the country and he tried to gain Pakistani or American support and refused to take Soviet advice. However this theory can be easily rejected as Amin was the leader for a Communist party. According to Soviet archieves Soviet forces were unable to save Amin from a mujahideen terrorist. This particular theory has more credibility in the minds of historians as the mujahidden were finaced by America and and America's hostile policies regarding against Communism.

Because of or in spite of this, Amin attempted to solidify his hold on the country militarily. This display of independent nationalism was not tolerated by Moscow, and in December 1979, the Soviets began their invasion of Afghanistan.

Islamic guerrillas in the mountainous countryside harassed the Afghan army to the point where the government of President Hafizullah Amin turned to the Soviet Union for increasingly large amounts of aid.

The Soviets decided to increase military aid to Afghanistan in order to maintain the Communist government, but they were dissatisfied with Amin as a leader capable of accomplishing this goal. Soviet leaders, based on information from the KGB, believed that Amin was destabilizing the situation in Afghanistan.

The last arguments to overthrow Amin were obtained by the KGB from its agents in Kabul. It was reported that two of Amin's guards killed the former president Nur Muhammad Taraki and that Amin was in secret meetings with a CIA agent. There were, however, some skeptics among the Soviet advisers in Afghanistan, chiefly General Vasily Zaplatin, a political adviser at that time, who claimed that four of Taraki's young ministers were responsible for the destabilization.

Amin feared the Soviet troops would be used to depose him. Fearing for his survival and uncertain of whom he could trust, he started putting his relatives into positions of power. Amin put one of his nephews in charge of the secret police, but that nephew was assassinated. Being concerned for his own safety, Amin then moved his headquarters out of Kabul .

An attempted poisoning of Amin was undertaken on December 13, 1979. Department 8 of the KGB succeeded in infiltrating the illegal agent Mitalin Talybov (codenamed SABIR) as a chef of Amin's presidential palace. However, Amin switched his food and drink as if he expected to be poisoned, so his son-in-law became seriously ill, and ironically, was flown to a hospital in Moscow.

Concerned for his safety, Amin moved the presidential offices to the Tajbeg Palace. The Soviets deployed soldiers near the palace, ostensibly to help protect it. However, their real purpose was to scout out the area and form a plan of attack. On December 27, elements of the KGB Alpha Group and Spetsnaz GRU stormed the Presidential Palace and killed Amin after another failed poisoning attempt. Amin was shot and killed by a Spetsnaz officer while hiding behind a bar. Another Spetsnaz soldier then lobbed a grenade in the vicinity of Amin, where it exploded, killing his young son.

The Soviet Spetsnaz blew up Kabul's communications hub, paralyzing the Afghan military command at 19:00. By 19:15, they had seized the Ministry of Interior. The Soviet military command at Termez did not wait until Amin's capture to announce on Radio Kabul (in a broadcast prerecorded by Babrak Karmal) that Afghanistan had been liberated from Amin's rule. 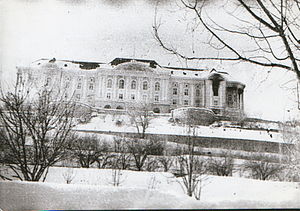 The palace where Amin he was a Killed

According to the Soviet Politburo, they were only complying with the 1978 Treaty of Friendship, Cooperation and Good Neighborliness that former President Taraki signed. The execution of Hafizullah Amin was, according to the Soviets, the action of the Afghan Revolutionary Central Committee. That committee then elected Babrak Karmal, who was in exile in Moscow, as head of government.

Accusations of being a CIA agent

The Soviet government and press repeatedly referred to Amin as a "CIA agent", a charge which was greeted with great skepticism in the United States. One argument against that belief, was that he always and everywhere showed official friendliness to the Soviet Union. After the assassination of Amin and two of his sons, his wife claimed that she and her remaining sons only wanted to go to the Soviet Union, because her husband was loyal to them until the end. She did eventually go to the Soviet Union to live.

Retrieved from "https://reallifevillains.miraheze.org/w/index.php?title=Hafizullah_Amin&oldid=125559"
Categories:
Cookies help us deliver our services. By using our services, you agree to our use of cookies.