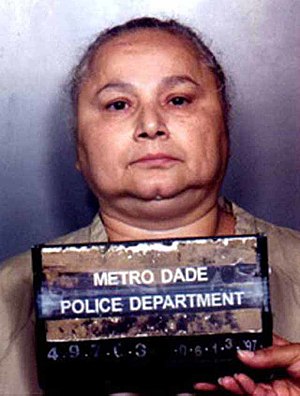 Griselda Blanco (February 15th, 1943 – September 3rd, 2012) was a Colombian drug lord of the Medellín Cartel and a pioneer in the Miami-based cocaine drug trade and underworld during the 1970s and early 1980s. It has been estimated that she was responsible for up to 200 murders while transporting cocaine from Colombia to New York, Miami, and Southern California.

Blanco was a major figure in the history of the drug trade from Colombia to Miami, New York, and California.

In the mid-1970s, Blanco and her second husband Alberto Bravo illegally immigrated to the US with fake passports, settling in Queens, New York. They established a sizable cocaine business there, and in April 1975, Blanco was indicted on federal drug conspiracy charges along with 30 of her subordinates. She fled to Colombia before she could be arrested, but returned to the United States, settling in Miami in the late 1970s.

Blanco's return to the US from Colombia more or less coincided with the beginning of very public violent conflicts that involved hundreds of murders and killings yearly which were associated with the high crime epidemic that swept the City of Miami in the 1980s. Law enforcement's struggle to put an end to the influx of cocaine into Miami led to the creation of CENTAC 26 (Central Tactical Unit), a joint operation between Miami-Dade Police Department and DEA anti-drug operation.

Blanco was involved in the drug-related violence known as the Miami Drug War or the Cocaine Cowboy Wars that plagued Miami in the late 1970s and early 1980s. This was a time when cocaine superseded marijuana trafficking. It was the lawless and corrupt atmosphere, primarily created by Blanco's operations, that led to the gangsters being dubbed the "Cocaine Cowboys" and their violent way of doing business as the "Miami drug war".

Her distribution network, which spanned the United States, brought in US$80,000,000 per month. Her violent business style brought government scrutiny to South Florida, leading to the demise of her organization and the free-wheeling, high-profile Miami drug scene of those times.

In 1984, Blanco's willingness to use violence against her Miami competitors or anyone else who displeased her, led her rivals to make repeated attempts to assassinate her. In an attempt to escape the hits that were called on her, she fled to California.

On February 17, 1985, she was arrested by DEA agents in her home and held without bail. After her trial, Blanco was sentenced to more than a decade in jail. While in prison, she continued to effectively run her cocaine business.

By pressuring one of Blanco's lieutenants, the Miami-Dade State Attorney's Office obtained sufficient evidence to indict Blanco for three murders. However, the case collapsed due to technicalities relating to a telephone-sex scandal between the star witness and female secretaries in the DA's office. In 2002, Blanco suffered a heart attack while imprisoned.

In 2004, Blanco was released from prison and deported to Medellín, Colombia. Before her death in 2012, the last sighting of Blanco was in May 2007 at the Bogotá Airport.

On the night of September 3, 2012, Blanco died after having been shot twice in the head by a motorcyclist in Medellín, Colombia. She was shot at Cardiso butcher shop on the corner of 29th Street, after having bought $150 worth of meat; the middle-aged gunman climbed off the back of a motorbike outside the shop, entered, pulled out a gun, and shot Blanco twice in the head before calmly walking back to his bike and disappearing into the city. She was 69.

Retrieved from "https://reallifevillains.miraheze.org/w/index.php?title=Griselda_Blanco&oldid=122191"
Categories:
Hidden category:
Cookies help us deliver our services. By using our services, you agree to our use of cookies.