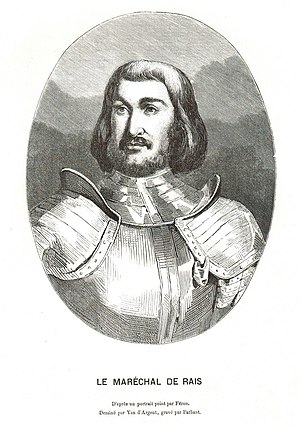 Gilles de Rais (September 10th, 1404 - October 26th, 1440) was a Breton Knight active in 1404 until 1440 and was infamous for being a prolific serial-killer, mainly of children. Gilles was also a practitioner of the occult and indeed it was a violent incident with a clergyman that ultimately exposed the knight for his true nature and as a result on the 26th October 1440, he was hanged for his crimes. Due to the nature of his crimes, Gilles has become somewhat infamous and is said to be one of the inspirations for Bluebeard.

Gilles de Rais was said to be extremely sadistic and a pedophile who took sexual pleasure out of the murder of children, although some at the time claimed he was a victim of the church. Most modern historians have agreed he was most likely a catholic who gave into criminality and depravity later in life, although a practitioner of the occult, Gilles was said to of actually been quite disappointed and angry with the occult since none of the promised wealth or magic his occult advisors promised him came to fruitation.

Gilles de Rais, due to his knightly status, was still granted a proper burial despite his horrendous crimes and a monument to him remained until its destruction during the French Revolution.

As well as Bluebeard, some believe the French origin of the word "ogre" may also of been inspired at least partially by the crimes of this man.

Retrieved from "https://reallifevillains.miraheze.org/w/index.php?title=Gilles_de_Rais&oldid=123147"
Categories:
Cookies help us deliver our services. By using our services, you agree to our use of cookies.