Gavrilo Princip (July 25th, 1894 - April 28th, 1918) was a Bosnian Serb Yugoslav nationalist who assassinated Archduke Franz Ferdinand of Austria-Hungary and his wife Sophie, Duchess of Hohenberg. The Assassination of Archduke Franz Ferdinand was one of the major events that lead to the start of World War I . Princip was sentenced to 20 years imprisonment and died in prison of malnutrition and Tuberculosis.

During his trial he stated "I am a Yugoslav nationalist, aiming for the unification of all Yugoslavs, and I do not care what form of state, but it must be freed from Austria."

Princip was born in Obljaj (now part of Bosnia & Herzegovina) on July 25th, 1894. Originally, his mother wanted to name him 'Špiro', after her deceased brother, but a local priest insisted he be named 'Gavrilo', believing that such a name would help the child survive past infancy.

At age 13, Princip moved to Sarajevo with his older brother and was enrolled in a merchant school. Princip came to admire Bogdan Žerajić, the man who attempted to assassinate Marijan Varešanin, the governor of Bosnia and Herzegovina, in 1910. Princip heavily advocated for the secession of Bosnia from Austria-Hungary, and for Bosnia to unite with the Kingdom of Serbia. In 1911, he became a member of Young Bosnia (Mlada Bosna), a revolutionary movement seeking to end the Austro-Hungarian rule of Bosnia, and was expelled from school a year later after participating in a demonstration against Austro-Hungarian authorities.

After being expelled, Princip made his way to Belgrade, Serbia. Once there, he attempted to join Serbian guerrilla forces, who were fighting against the Ottoman Turks]. Because of his small stature, he was rejected twice from joining, and subsequently returned to Sarajevo to live with his brother.

On June 28th, 1914, a motorcade for Franz Ferdinand and his wife Sophie, Duchess of Hohenberg was scheduled to drive through the city of Sarajevo. Gavrilo was one of six assassins present during the motorcade. 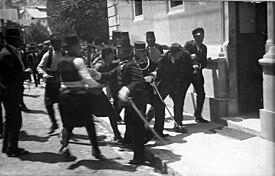 One of the assassins hurled a grenade at Franz Ferdinand as he passed, but its explosion was delayed, and ended up injuring several spectators instead. Following the incident, Franz Ferdinand changed his plans in favor of visiting those who were injured by the explosion. While on their way to the hospital, the motorcade took a wrong turn, bringing it near the northern end of the Latin Bridge. As Governor Oskar Potiorek, who failed to inform chauffer Leopold Lojka, realized the wrong turn, Princip, standing at a nearby deli, fired once at Franz Ferdinand, and fired again at Governor Potiorek, but missed and hit Sophie, Duchess of Hohenberg instead.

Gavrilo then turned the gun on himself, but was subdued by police before he could pull the trigger. Both Franz Ferdinand and Sophie died from their injuries minutes later.

Princip and the five other assassins were arrested and brought to trial. During his trial, Princip was quoted as saying "I am a Yugoslav nationalist, aiming for the unification of all Yugoslavs, and I do not care what form of state, but it must be freed from Austria."

Princip could not be sentenced to death, as he was just shy of age 20, the minimum age for said sentence. Instead, Princip was sentenced to 20 years in prison.

In prison, Princip became ill from tuberculosis and malnutrition, and his right arm had to be amputated. In January 1916, he attempted suicide by hanging himself with a towel, but was unsuccessful. On April 28th, 1918, roughly four years after the assassination, Princip died in prison due to complications of tuberculosis.

While in prison, Austria-Hungary issued the Kingdom of Serbia an ultimatum, which led to the beginning of World War I.

Retrieved from "https://reallifevillains.miraheze.org/w/index.php?title=Gavrilo_Princip&oldid=151014"
Categories:
Hidden category:
Cookies help us deliver our services. By using our services, you agree to our use of cookies.