Francisco Franco y Bahamonde (December 4th, 1892 - November 20th, 1975) was a Spanish general and statesman who served as the leader of the fascist Spanish Falange movement and a conspirator of the Spanish Civil War. He ruled Spain for about forty years, officially holding the title of Caudillo. He led the Spanish far-right movements to overthrow the government and then shoved away any one deemed as a threat to Spain. While he stayed neutral during World War II, he was considered an ally of the Axis Powers and sent aid to both Adolf Hitler and Benito Mussolini in the form of a volunteer groups like the spanish Blue Division. The growth proved too much for the economy, with shortages and inflation breaking out towards the end of the 1950s.

A staunch enemy of communism, Franco was a strong ally of the United States during the Cold War, and aided them against the Soviet Union until his death in 1975.

Francisco Franco y Bahamonde was born to Spanish nobility on December 4th, 1892 in Ferrol Spain. As a child Franco aspired to be a naval officer. (A custom within his family.)

However, these dreams would soon be crushed as a result of the Spanish losing almost all of their colonies following their defeat in the Spanish-American war.

Franco mostly underwent abuse by his alcoholic father and was mostly neglected. Franco's mother tended to spoiled Franco on the other hand.

His mother's belief of a Traditional Spain inspired him to carry on a career in military service.

Francisco Franco resorted to setting up a career in the Spanish military. During the Rif wars, Franco was sent to defeat moorish rebels in Spanish Morocco . Franco eventually was promoted to the rank of Colonel at the age of 33. During combat he was wounded after being shot in the intestines and losing a Testicle.

Franco was particularly known for his cruelty when commanding the Spanish Army of Africa. It is known that Franco killed any rowdy soldiers and forced his battalion to march around the corpses. As well the Moors carried out savage acts of beheading their enemies.

In 1931, King Alfonso the XIII abdicated the throne of Spain after massive political strife calling for his Abdication. Spain thus became a Republic. Franco was opposed to the Republic, even though he still served in the Army. Much to the dismay of Franco, the government under the Republic was very liberal. Abortion and Gay Marriage were legalized, land was to be redistributed, the Catholic Church would lose its power in the government, and Autonomous regions such as Basque and Catalonia would be granted greater autonomy from Spain.

This concept terrified many Right-Wing peasants living in Southern Spain as well as other military officers like Franco. Eventually the right wing party C.E.D.A took power in the general election of 1933. Most of the leftist reforms were slowed down and the government shifted to the right. Many Communists, anarchists, trotskyists, and socialists feared that their revolution against the forces of Spanish reaction had shifted against their favor.

In 1934 left wing parties revolted against the government (Mostly In Asturias) Franco was sent in to counter the revolutionaries using the Moors and Foreign Legion.

In 1936, the left wing united into the Popular Front Movement and ran for office against the C.E.D.A and won by a narrow victory. Franco was in exile by the leftist government to avoid the possibility of a mainland coup attempt by right wing generals. On July 17th, 1936, Franco agreed to join in a plot to over throw the republic. With support of the Germans and Italians, Franco and his moorish troops arrived on the main land joined by many followers of the Falange and the Monarchist Requetes. Three years later after brutal fighting, Franco and his forces destroyed the republic and announced the victory on April 1st, 1939.

After the civil war, Spain's economy was decimated and starvation began as a result of Republican forces destrting Spanish Farms. Adolf Hitler saw an increasing need to have the Spanish as an ally in order to Capture Gibraltar from the British.

In the 1940's, Hitler and Franco held several talks and negotiations. Franco promised to join the Axis Powers but only if the Axis powers could provide economic support and territorial gains. However, Hitler saw the requests Franco made as Damaging to his own regime (Ceding Territories of Philippe Pétain's Vichy France government.)

In the end, Hitler realized that having Spain as an ally would be a nuisance and counter productive to the war effort. Hitler later stated, "I'd rather pull my teeth than hear another word from that man!"

Franco's reception of Hitler was not much better. Franco thought that Hitler was secretly gay. Due to Franco's homophobia, he feared that he would go to Purgatory for coming into contact with a homosexual. His fear of gay attitude was known by many. As historians read through his diary, there was a strange occurrence in the past. When Hitler and Franco had to share a room, Franco tested if Hitler was gay. Franco went nude in front of Hitler, and an offended Hitler yelled curses at him. Franco was terrified and attempted to chop his penis off. He failed, and the relationship between the two leaders was tense for around six months. Despite this, Spain and the Axis Powers had a good relationship through the duration of the war and Franco provided aid to both Hitler and Benito Mussolini of Italy when they needed it.

The most difficult period of Franco’s regime began in the aftermath of World War II, when his government was ostracized by the newly formed United Nations. He was labeled by hostile foreign opinion the “last surviving fascist dictator” and for a time appeared to be the most hated of Western heads of state; within his country, however, as many people supported him as opposed him. The period of ostracism finally came to an end with the worsening of relations between the Soviet world and the West at the height of the Cold War. Franco could now be viewed as one of the world’s leading anticommunist statesmen, and relations with other countries began to be regularized in 1948. His international rehabilitation was advanced further in 1953, when Spain signed a 10-year military assistance pact with the United States, which was later renewed in more limited form.

Franco’s domestic policies became somewhat more liberal during the 1950s and ’60s, and the continuity of his regime, together with its capacity for creative evolution, won him at least a limited degree of respect from some of his critics. Franco said that he did not find the burden of government particularly heavy, and, in fact, his rule was marked by absolute self-confidence and relative indifference to criticism. He demonstrated marked political ability in gauging the psychology of the diverse elements, ranging from moderate liberals to extreme reactionaries, whose support was necessary for his regime’s survival. He maintained a careful balance among them and largely left the execution of policy to his appointees, thereby placing himself as arbiter above the storm of ordinary political conflict. To a considerable degree, the opprobrium for unsuccessful or unpopular aspects of policy tended to fall on individual ministers rather than on Franco. The Falange state party, downgraded in the early 1940s, in later years became known merely as the “Movement” and lost much of its original quasi-fascist identity. 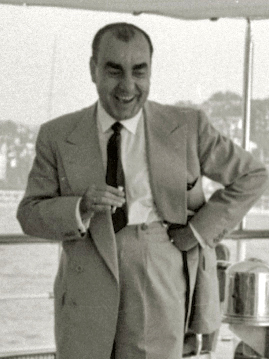 Unlike most rulers of rightist authoritarian regimes, Franco provided for the continuity of his government after his death through an official referendum in 1947 that made the Spanish state a monarchy and ratified Franco’s powers as a sort of regent for life. In 1967 he opened direct elections for a small minority of deputies to the parliament and in 1969 officially designated the then 32-year-old prince Juan Carlos, the eldest son of the nominal pretender to the Spanish throne, as his official successor upon his death. Franco resigned his position of premier in 1973 but retained his functions as head of state, commander in chief of the armed forces, and head of the “Movement.”

Franco was never a popular ruler and rarely tried to mobilize mass support, but after 1947 there was little direct or organized opposition to his rule. With the liberalization of his government and relaxation of some police powers, together with the country’s marked economic development during the 1960s, Franco’s image changed from that of the rigorous generalissimo to a more benign civilian elder statesman.

Franco’s health declined markedly in the late 1960s, yet he professed to believe that he had left Spain’s affairs “tied and well-tied” and that after his death Prince Juan Carlos would maintain at least the basic structure of his regime. After Franco’s death in 1975 following a long illness, his body was interred in the Valley of the Fallen, a massive mausoleum northwest of Madrid that houses the remains of tens of thousands of casualties from both sides of the Spanish Civil War.

In Spain and abroad, the legacy of Franco remains controversial. The length of his rule, the suppression of opposition, and the effective propaganda sustained through the years has made a detached evaluation impossible. For 40 years, Spaniards, and particularly children at school were told that Divine Providence had sent him to save Spain from chaos and poverty. With time, the regime evolved and the ferocious oppression of the early 1940s was reduced over the years. The economic success of the latter part of his regime won support from many citizens, who found the dramatic rise in the everyday standard of living more significant than his regime's human rights abuses, although strong anti-Francoist views are held by large numbers of Spaniards to this day.

Retrieved from "https://reallifevillains.miraheze.org/w/index.php?title=Francisco_Franco&oldid=157283"
Categories:
Hidden category:
Cookies help us deliver our services. By using our services, you agree to our use of cookies.