Expulsion of the Chagossians 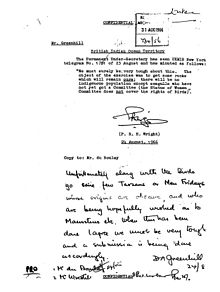 The Expulsion of the Chagossians was the forced expulsion of the inhabitants of the island of Diego Garcia and the other islands of the British Indian Ocean Territory (BIOT) by the United Kingdom, at the request of the United States, beginning in 1968 and concluding on 27 April 1973 with the evacuation of Peros Banhos atoll.

The Chagossians were an ethnic group that inhabited the archipelago of the Chagos Islands, in the Indian Ocean, and that their main island was Diego Garcia.

Chagossians are descendants of African slaves brought in by the French in the 18th century, when the Chagos Islands archipelago belonged to them, and the islands were later later handed over to the United Kingdom, which abolished slavery.

As free men, the Chagossians would form their own culture, dedicating themselves to agriculture and having a good quality of life, while also forming a great bond of friendship with the dogs of the islands.

However, during the Cold War, the United States wanted to have presence in the Indian Ocean to be able to attack targets in Africa and the Middle East, so it asked the United Kingdom government to give it permission to build a large military base on the island Diego Garcia, to which the British accepted, however, the islands were inhabited by the Chagossians, so the British and American governments began to secretly plan a plan to, in the words of the Americans, "disinfect the island" .

Firstly, the islands were administered from Mauritius, so the British government decided to revoke the islands of Mauritius to create a new colony, giving rise to the British Indian Ocean Territory (BIOT), which was created for the sole purpose of expelling to the chagosianos.

After this, the United States and the United Kingdom began to block the access of boats that transported food to the islands, this in order to generate a famine and make the Chagossians want to leave the islands. Later, Bruce Greatbatch, ordered all the dogs on Diego Garcia to be killed. More than 1000 pets were gassed with exhaust fumes. This was done in order to scare the Chagossians, who had a great bond with dogs. Also, all Chagossians who had traveled to Mauritius were not allowed to return, causing many to lose their belongings and be stranded in Mauritius.

Finally, the colonial authorities began to forcibly expel the Chagossians, since they would be transported on a boat to Mauritius, only allowing them to carry a suitcase and having to sleep next to bird droppings with only a mattress (note that families They were numerous, so a mattress was not enough for a whole family).

Later, the ship sailed, first stopping in Seychelles and later in Mauritius, where the British would leave the Chagossians to fend for themselves on the dock, causing many to end up living in extreme poverty, leading to the suicide of many Chagossians.

After the expulsion, many Chagossians protested to return to their islands, so the British government offered a contract, where they would be given a monetary compensation that was not enough to lift them out of poverty, and like many did not know English (to be exact , the contract was in legal English), the British took advantage of this to put in the contract that the Chagossians who signed the contract would renounce their rights as inhabitants of the Chagos Islands, for which many signed naively.

Later, secret documents showing the conspiracy and conversations of the United Kingdom and United States governments were discovered, which would have lied to the United Nations saying that the islands were disabled, violating the United Nations charter (which says that The United Kingdom must protect the rights of all its citizens). After the discovery of these documents, the London Supreme Court agreed with the Chagossians that they had to return to their islands, however, the British government ignored this.

Currently, the Expulsion of the Chagossians is considered a crime against humanity and an illegal act, and currently the Chasonians are still unable to return to the Chagos Islands, while the United States has used the base to attack targets in Afghanistan and Iraq.

Documentary on the Expulsion of the Chagossians

Retrieved from "https://reallifevillains.miraheze.org/w/index.php?title=Expulsion_of_the_Chagossians&oldid=102237"
Categories:
Hidden category:
Cookies help us deliver our services. By using our services, you agree to our use of cookies.