Hoxha is considered to be one of the most brutal communist leaders of the Cold War. The 40-year period of Hoxha's rule was politically characterized by the elimination of the opposition], prolific use of the death penalty as well as long prison sentences or political opponents and evictions from homes where their families lived and their internment in remote villages that were strictly controlled by police and the secret police (Sigurimi). Also his rule was characterized by Stalinist methods to destroy his associates, who threatened his own power,[3] economically during his period Albania became industrialised and saw rapid economic growth, as well as unprecedented progress in the areas of education and health. He focused on rebuilding the country which was left in ruins after World War II, building Albania's first railway line, eliminating illiteracy from adult population and leading to Albania becoming agriculturally self-sufficient.

Hoxha's government was characterized by his proclaimed firm adherence to antirevisionist Marxism-Leninism, even breaking away from former allies such as Tito's Yugoslavia. After his break with Maoism in the late 1970s, numerous Maoist parties declared themselves Hoxhaist. The International Conference of Marxist–Leninist Parties and Organizations (Unity & Struggle)] is the most known collection of these parties today.

Hoxha was born in Gjirokastër, Ottoman Albania, the son of Halil Hoxha, a Muslim Tosk cloth merchant who travelled widely across Europe and the US, and Gjylihan (Gjylo) Hoxha (née Çuçi). His surname Hoxha, in Turkish hoca (pronounced hodja), means "Master" or a "Teacher". His surname is derived from the noun khawaja which when used specifically in the Albanian language refers to a Muslim priest, given that some of his paternal ancestors have likely been the members of the Muslim clergy (ulema).

After elementary school, he followed his studies in the city senior high school "Liria". He started his studies at the Gjirokastër Lyceum in 1923. After the lyceum was closed, due to intervention of Prime Minister Eqrem Libohova.

In 1930, Hoxha went to study at the University of Montpellier in France on a state scholarship for the faculty of natural science, but lost an Albanian state scholarship for neglecting his studies. He later went to Paris, where he presented himself to anti-Zogist immigrants as the brother-in-law of Bahri Omari, whom he would later execute.

Hoxha became a teacher, working as a secretary in the Albanian consulate in Brussels. After returning to Albania, he worked as a contract teacher in the Gymnasium of Tirana. Hoxha taught French and morals in the Korça Liceum from 1937 to 1939 and also served as the caretaker of the school library.

In July 1942, Hoxha wrote "Call to the Albanian Peasantry", issued in the name of the Communist Party of Albania. The call sought to enlist support in Albania for the war against the fascists. The peasants were encouraged to hoard their grain and refuse to pay taxes or livestock levies brought by the government. After the September 1942 Conference at Pezë, the National Liberation Movement was founded with the purpose of uniting the anti-fascist Albanians, regardless of ideology or class.

By March 1943, the first National Conference of the Communist Party elected Hoxha to become the First Secretary. During WWII, the Soviet Union's role in Albania was negligible.. On 10 July 1943, the Albanian partisans were organized in regular units of companies, battalions and brigades and named the Albanian National Liberation Army. The organization received military support from the British intelligence service, SOE .The General Headquarters was created, with Spiro Moisiu as the commander and Hoxha as political commissar. The Yugoslav Partisans had a much more practical role, helping to plan attacks and exchanging supplies, but communication between them and the Albanians was limited and letters would often arrive late, sometimes well after a plan had been agreed upon by the National Liberation Army without consultation from the Yugoslav partisans.[citation needed]

Within Albania, repeated attempts were made during the war to remedy the communications difficulties which faced partisan groups. In August 1943, a secret meeting, the Mukje Conference, was held between the anti-communist Balli Kombëtar (National Front) and the Communist Party of Albania. The result of this was an agreement to:

Unite in a single struggle against the fascist invader. Cease all attacks between the two parties signing the agreement. Form a joint operational staff to coordinate military actions within Albania. Recognise that the democratically elected national liberations councils are the state power in Albania. Recognise that the goal for the post-war era is an independent, democratic Albania where the people themselves will decide the form of government. Recognise and respect the Atlantic Charter, the London and Washington Treaties between the USSR, Great Britain and the US in connection with the question of Kosovo and Çamëria. Be it resolved that the populations of Kosovo and Camëria will themselves decide their future in accordance with their wishes. Unite with any political group, whatever their beliefs, in a common military effort against the fascist invaders. However, the Communist Party of Albania will not collaborate with any group of the National Front that continues to maintain contacts with the fascist invaders. The Communist Party of Albania will unite with any group that used to have contacts with the fascist invaders, but has now terminated those contacts and is willing to now fight against the fascist invaders, provided those groups have not committed any crimes against the people.[22] To encourage the Balli Kombëtar to sign, the Greater Albania sections that included Kosovo (part of Yugoslavia) and Chamëria were made part of the Agreement. 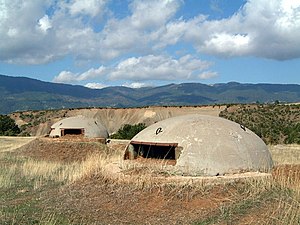 Over 400,000 bunkers were built during the rule of Enver Hoxha

Under Hoxha, Albania was almost completely isolated from the outside World. He forced out all religion in Albania, declaring Albania to be "the first atheist state in the World", despite several countries including the USSR becoming atheist. The Agrarian Reform Law of August 1945 nationalized most property of religious institutions, including the estates of mosques, monasteries, orders, and dioceses. Catholics were deemed to be "fascist" and all foreign Roman Catholic priests, Jesuits, monks and nuns were expelled by 1946. Towns with religious names were renamed. Beards and all hair over 4 centimeters were banned and nobody with banned hairstyles were allowed to enter the country. All religious communities were prohibited from owning real estate and operating philanthropic and welfare institutions and hospitals. Thousands of people disappeared or were killed under him, including those who openly practiced religion. Religious clerics were publicly vilified and humiliated, their vestments were taken and desecrated. More than 200 clerics of various faiths were imprisoned, others were forced to seek work in either industry or agriculture, and some were executed or starved to death. The cloister of the Franciscan order in Shkodër was set on fire, which resulted in the death of four elderly monks. By 1953, Catholic churches were drastically decreased from 253 to 100. Hoxha's regime would often humiliate those who practiced religious fasts such as Lent and Ramadan by offering them food, publicly denouncing them if they refused. By 1967, religious institutions had been forced to relinquish all 2,169 churches, mosques, cloisters, and shrines in Albania, many of which were converted into cultural centers for young people as well as warehouses and gymnasiums. In 1971, Catholic priest Shtjefën Kurti was executed for secretly baptizing a child, with his execution being kept a secret until the news was leaked to the Vatican over a year later. The penal code of 1977 imposed prison sentences of three to ten years for "religious propaganda and the production, distribution, or storage of religious literature", which meant that individuals caught with Bibles, Qurans, icons, or other religious objects would be sentenced to prison in Gulags. Many Albanians, both Christian and Muslim, would practice their faith in secret.

In 1951, he ordered the execution of 22 intellectuals without trial, accusing them of bombing the Soviet embassy in Tirana. Among them were Jonuz Kaceli, a businessman and dissident who was accused of trying to harm Prime Minister Mehmet Snehu. Kaceli was thrown off a building a day before the massacre. Mass graves can still be found in rural towns from his multiple massacres. However Hoxha did have some loose scruples as he ironically criticized Pol Pot's brutality and bloodthirsty nature which was more exaggerated Hoxha's.

Self-reliance was now stressed more than ever. Citizens were encouraged to train in the use of weapons, and this activity was also taught in schools. This was to encourage the creation of quick military partisans.[107]

Borrowing and foreign investment were banned under Article 26 of the Constitution, which read: "The granting of concessions to, and the creation of foreign economic and financial companies and other institutions or ones formed jointly with bourgeois and revisionist capitalist monopolies and states as well as obtaining credits from them are prohibited in the People's Socialist Republic of Albania."[108] No country whatsoever, big or small, can build socialism by taking credits and aid from the bourgeoisie and the revisionists or by integrating its economy into the world system of capitalist economies. Any such linking of the economy of a socialist country with the economy of bourgeois or revisionist countries opens the doors to the actions of the economic laws of capitalism and the degeneration of the socialist order. This is the road of betrayal and the restoration of capitalism, which the revisionist cliques have pursued and are pursuing.—Enver Hoxha[109]Albania was very poor and backward by European standards and it had the lowest standard of living in Europe.[110] As a result of economic self-sufficiency, Albania had a minimal foreign debt. In 1983, Albania imported goods worth $280 million but exported goods worth $290 million, producing a trade surplus of $10 million.[111]

In 1981, Hoxha ordered the execution of several party and government officials in a new purge. Prime Minister Mehmet Shehu, the second-most powerful man in Albania and Hoxha's closest comrade-in-arms for 40 years, was reported to have committed suicide in December 1981. He was subsequently condemned as a "traitor" to Albania, and was also accused of operating in the service of multiple intelligence agencies. It is generally believed that he was either killed or shot himself during a power struggle or over differing foreign policy matters with Hoxha.[112] Hoxha also wrote a large assortment of books during this period, resulting in over 65 volumes of collected works, condensed into six volumes of selected works.[113]

Hoxha suffered a heart attack in 1973 from which he never fully recovered. In increasingly precarious health from the late 1970s onward, he turned most state functions over to Ramiz Alia. In his final days, he used a wheelchair and was suffering from diabetes, which he had suffered from since 1948, and cerebral ischemia. On April 9th, 1985; he suffered a massive ventricular fibrillation. All efforts to reverse it failed, and he died on the morning of April 11th, 1985.[114]

Hoxha's death left Albania with a legacy of isolation and fear of the outside world. Despite some economic progress made by Hoxha,[115] the country was in economic stagnation; Albania had been the poorest European country throughout much of the Cold War period. Following the transition to democracy in 1992, Hoxha's legacy diminished, so that by the early 21st century very little of it was still in place in Albania. The bunkers that were built under his rule have since transformed to multi uses, from residential to commercial.

Retrieved from "https://reallifevillains.miraheze.org/w/index.php?title=Enver_Hoxha&oldid=161373"
Categories:
Cookies help us deliver our services. By using our services, you agree to our use of cookies.