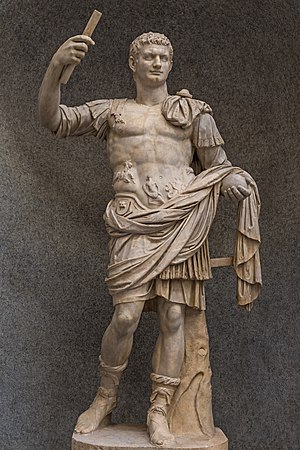 Titus Flavius Domitian was the 11th emperor of rome. He is known for his persecution of Christians, Jews, due to the fact that they were threats to the traditional roman religion and murdered many of the rich and noble.

Like Caligula, Domitian was slightly bald and was extremely sensitive to people calling him bald. He was an adept archer and would frequently forced slaves to put their hands on an archery target board, with his fingers outstrecthed, so that he could shoot the arrow between the fingers, which would mean extreme pain for the slave if he had missed the target. On top of that, he also shot hundreds of animals from his palace.

Although hated by the public, especially by aristocrats, he was popular among his soldiers, who were furious when he was killed. Domitian's reign came to an end when one day, his wife found his tablets where he wrote down the names of people he is going to kill next, and when she found her name on it, she requested 2 Praetorian guards whose name were also on the tablets, and asked them to kill Domitian to save their own lives.

Retrieved from "https://reallifevillains.miraheze.org/w/index.php?title=Domitian&oldid=126818"
Categories:
Cookies help us deliver our services. By using our services, you agree to our use of cookies.