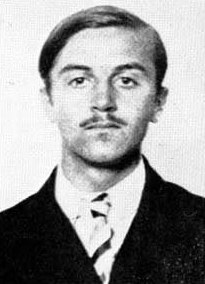 Cvjetko Popović was a Bosnian Serb who was involved in the 1914 assassination of Archduke Franz Ferdinand of Austria.

He was born in what is modern-day Bosnia and Herzegovina. He was an 18 year old student, studying in Sarajevo when Danilo Ilić recruited him and his friend, Vaso Čubrilović to help assassinate Archduke Franz Ferdinand.

Nikola Pašić, the prime minister of the Kingdom of Serbia, heard about the plot and gave instructions for the three men to be arrested. However, his orders were not implemented and the three man arrived in Bosnia and Herzegovina where they joined forces with fellow conspirators, Gavrilo Princip, Miško Jovanović and Vaso's brother Veljko Čubrilović.

On Sunday, 28 June 1914, Franz Ferdinand and Sophie von Chotek were assassinated by Gavrilo Princip. Princip and Nedjelko Čabrinović were captured and interrogated by the police. They eventually gave the names of their fellow conspirators. Muhamed Mehmedbašić managed to escape to Serbia but Popović, Ilić, Jovanović, and the Čubrilović brothers were arrested and charged with treason and murder.

All the men were found guilty. Under Austro-Hungarian law, an offender under the age of 20 could not be executed. Nedjelko Čabrinović, Gavrilo Princip and Trifko Grabež therefore received the maximum penalty of twenty years, whereas Vaso Čubrilović were sentenced to 16 years and Popović to 13 years prison at Terezín.

Popović was released when the Allies defeated the Central Powers in November 1918, having served 4 years of his 20-year sentence.

Retrieved from "https://reallifevillains.miraheze.org/w/index.php?title=Cvjetko_Popović&oldid=138047"
Categories:
Cookies help us deliver our services. By using our services, you agree to our use of cookies.