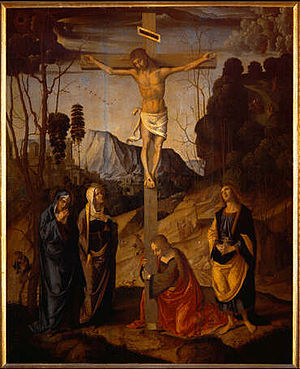 Crucifixion is a method of torture and execution in which the victim is nailed to a cross and left to hang there. It was the method of execution used on  Jesus at Nazerath. Depending on the victim's health and enviroment the death could range from Death could result from any combination of causes, including blood loss resulting in hypovolemic shock, sepsis following infection due to the wounds caused by the nails or by the scourging that sometimes preceded the crucifixion, or eventual dehydration.

Retrieved from "https://reallifevillains.miraheze.org/w/index.php?title=Crucifixion&oldid=126813"
Categories:
Cookies help us deliver our services. By using our services, you agree to our use of cookies.