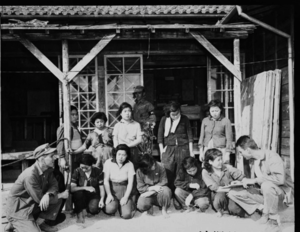 Comfort women, also called military comfort women, Japanese jūgun ianfu, a euphemism for women who provided sexual services to Imperial Japanese Army troops during Japan’s militaristic period that ended with World War II and who generally lived under conditions of sexual slavery. Estimates of the number of women involved typically range up to 200,000, but the actual number may have been even higher. The great majority of them were from Korea (then a Japanese protectorate), though women from China, Taiwan, and other parts of Asia—including Japan and Dutch nationals in Indonesia—were also involved. From 1932 until the end of the war in 1945, comfort women were held in brothels called “comfort stations” that were established to enhance the morale of Japanese soldiers and ostensibly to reduce random sexual assaults. Some of the women were lured by false promises of employment, falling victim to what amounted to a massive human trafficking scheme operated by the Japanese military. Many others were simply abducted and sent against their will to comfort stations, which existed in all Japanese-occupied areas, including China and Burma (Myanmar). Comfort stations were also maintained within Japan and Korea. The women typically lived in harsh conditions, where they were subjected to continual rapes and were beaten or murdered if they resisted. The Japanese government had an interest in keeping soldiers healthy and wanted sexual services under controlled conditions, and the women were regularly tested for sexually transmitted diseases and infections. According to several reports—notably, a study sponsored by the United Nations that was published in 1996—many of the comfort women were executed at the end of World War II. The women who survived often suffered physical maladies (including sterility), psychological illnesses, and rejection from their families and communities. Many survivors in foreign countries were simply abandoned by the Japanese at the end of the war and lacked the income and means of communication to return to their homes.

Retrieved from "https://reallifevillains.miraheze.org/w/index.php?title=Comfort_women&oldid=115608"
Categories:
Cookies help us deliver our services. By using our services, you agree to our use of cookies.