Jump to content
The Assassination of Archduke Franz Ferdinand of Austria occurred on June 28, 1914, in the city of Sarajevo. Both Franz Ferdinand and his wife Sophie, Duchess of Hohenberg were shot and killed by assassin Gavrilo Princip, a Yugoslav nationalist with ties to the Pan-Serbian Black Hand society.

The assassination was one of the major events that brought forth the beginning of World War I, and the dissolution of Austria-Hungary.

Franz Ferdinand succeeded to the throne as Archduke of Austria in 1896, after his father, Karl Ludwig, died of typhoid fever. He married Sophie Chotek in 1900, and she subsequently gained the title Sophie, Princess of Hohenberg, and would later be promoted to Duchess of Hohenberg.

In 1901, Serbian Dragutin Dimitrijević formed a group that would later become known as the Black Hand. Dimitrijević advocated for the unification of all South Slav states and their separation from Austria-Hungary.

In 1914, the Black Hand (who were now officially called Unification or Death) began planning the assassination of Archduke Franz Ferdinand, and had recruited six people to carry out the task.

Gavrilo Princip, a 19-year-old Bosnian, had a deep resentment for Austria-Hungary and was a Yugoslav nationalist. On the day of the assassination, he would be the only assassin to successfully carry out the task.

The six assassins arrived in Sarajevo several weeks before the day of the assassination, armed with weapons and cyanide pills. Each were given individual instructions for how they were supposed to kill Franz Ferdinand. Franz Ferdinand and Sophie were scheduled to be driven through the city in a motorcade on June 28. The six assassins present during the motorcade (in order) were:

The motorcade began at around 10:00 AM. The motorcade first passed Mehmedbašić and Čubrilović, but both failed to act. As the motorcade approached Čabrinović, he threw a grenade at Franz Ferdinand. However, the grenade's explosion was delayed by 10 seconds, and bounced off the back of the vehicle, injuring several spectators instead. Čabrinović then swallowed his cyanide pill and jumped into the river behind him. However, the cyanide was old and only induced vomiting. Čabrinović was immediately pulled out of the river and beaten by spectators.

The motorcade quickly advanced towards the town hall, and Popović, Princip, and Grabež all failed to act. Upon arrival at the town hall, Franz Ferdinand said to the mayor, "Mr. Mayor, I came here on a visit and I am greeted with bombs. It is outrageous."

Following his failure to act, Gavrilo Princip repositioned himself in front of Schiller's Delicatessen, across the river. He believed this would give him a better vantage point to carry out the assassination.

Franz Ferdinand and Sophie decided to change their plans in favor of visiting those injured by the grenade, and departed the town hall for the nearby hospital. The directions to the hospital were unclear to the driver, and the vehicle took a wrong turn down an alley way. The driver realized his mistake, and stopped the car, bringing the vehicle to the exact position where Gavrilo Princip was standing.

Princip then stepped forward and shot Franz Ferdinand in the neck, and then aimed the gun towards Governor Oskar Potiorek, but hit Sophie instead. After the shooting, Princip turned the gun on himself, but was wrestled to ground by police before he could pull the trigger. Soon after, both Franz Ferdinand and Sophie died from their injuries.

In the hours after the assassination occurred, riots broke out in the streets of Sarajevo, and two Serbs were killed. Believing that the assassination was a Serbian conspiracy, the government of Austria-Hungary issued the July Ultimatum, which listed demands for Serbia to accept in order to maintain peaceful relations. The ten demands were as follows:

On July 28, upon hearing that Serbia had not accepted all of the demands, Austria-Hungary declared war on Serbia. This war would eventually expand into World War I. 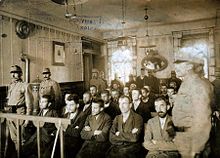 The trial for the assassins took place in October 1914. Five of the assassins were brought to trial (Mehmedbasić had escaped to Montenegro), plus an additional 20 individuals who had minor involvement. During the trial, Princip stated "I am a Yugoslav nationalist, aiming for the unification of all Yugoslavs, and I do not care what form of state, but it must be freed from Austria."

All five of the assassins present at the trial were found guilty. Since they were all under the age of 20, none of them could be sentenced to death. Čabrinović, Grabež, and Princip were given the maximum sentence of 20 years, while Čubrilović was given 16 years and Popović was given 10.

Retrieved from "https://reallifevillains.miraheze.org/w/index.php?title=Assassination_of_Archduke_Franz_Ferdinand&oldid=129671"
Categories:
Hidden category:
Cookies help us deliver our services. By using our services, you agree to our use of cookies.