Ahmed Sékou Touré (var. Ahmed Sheku Turay) (January 9, 1922 – March 26, 1984) was a Guinean political leader who was the first President of Guinea, serving from 1958 until his death in 1984. Touré was among the primary Guinean nationalists involved in gaining independence of the country from France.

A devout Muslim from the Mandinka ethnic group, Sékou Touré was the great grandson of the powerful Mandinka Muslim cleric Samori Toure who established an independent Islamic rule in part of West Africa. In 1960, he declared his Democratic Party of Guinea (Parti démocratique de Guinée, PDG) the only legal party in the state, and ruled from then on as a virtual dictator. He was re-elected unopposed to four seven-year terms in the absence of any legal opposition. Under his rule, many people were killed and imprisoned including at the notorious Camp Boiro.

Domestically, Sékou Touré pursued socialist economic policies, including nationalizations of banks, energy and transportation; in foreign affairs, he joined the Non-Aligned Movement and developed very close relations with Mao Zedong and the People's Republic of China.

In 1960, Touré declared the PDG to be the only legal party, though the country had effectively been a one-party state since independence. For the next 24 years, Touré effectively held all governing power in the nation. He was elected to a seven-year term as president in 1961; as leader of the PDG he was the only candidate. He was reelected unopposed in 1968, 1974 and 1982. Every five years, a single list of PDG candidates was returned to the National Assembly.

During his presidency, Touré's policies were strongly based on Marxism, with the nationalization of foreign companies and centralized economic plans. He won the Lenin Peace Prize as a result in 1961. Most of those actively opposed to his regime were arrested and then jailed or exiled. His early actions to reject the French and then to appropriate wealth and farmland from traditional landlords angered many powerful forces, but the increasing failure of his government to provide either economic opportunities or democratic rights angered more. Famously, he stated that "Guinea prefers poverty in freedom to riches in slavery." While he is still revered in much of Africa and in the Pan-African movement, many Guineans, and activists in Europe, have become critical of Touré's failure to institute meaningful democracy or free media.

Opposition to single-party rule grew slowly, and by the late 1960s those who opposed his government faced the risk of detention camps and night visits by the secret police. His opponents often had two choices: say nothing or go abroad. Guineans who had fled reported that Touré's regime "practices tyranny and torture on a daily basis". His approach towards his opponents caused charges to be brought from Amnesty International (as well as other human rights organizations), accusing his rule to be too oppressive. From 1965 to 1975 Toure ended all his government's relations with France, the former colonial power.

Touré argued that Africa had lost much during colonization, and that Africa ought to retaliate by cutting off ties to former colonial nations. However, in 1978 Guinea's ties with the Soviet Union soured, and, as a sign of reconciliation, President of France Valéry Giscard d'Estaing visited Guinea, the first state visit by a French president.

Throughout Toure's dispute with France, he maintained good relations with several socialist countries. However, Touré's attitude toward France was not generally well received by his own people and some African countries ended diplomatic relations with Guinea over his actions. He also often voiced his distrust of other African nations. Meanwhile, some 1.5 million Guineans were fleeing Guinea to neighboring countries, such as Sierra Leone. Despite this, Touré's position won the support of many anti-colonialist and Pan-African groups and leaders.

Touré's primary allies in the region were presidents Kwame Nkrumah of Ghana and Modibo Keita of Mali. After Nkrumah was overthrown in a 1966 coup, Touré offered him asylum in Guinea and gave him the honorary title of co-president. As a leader of the Pan-Africanist movement, Toure consistently spoke out against colonial powers, and befriended African American activists such as Malcolm X and Stokely Carmichael, to whom he offered asylum. The latter took the two leaders' names, as Kwame Ture.

With Nkrumah, Toure helped in the formation of the All-African Peoples Revolutionary Party, and aided the PAIGC guerrillas in their fight against Portuguese colonialism in neighboring Portuguese Guinea. The Portuguese launched an attack upon Conakry in 1970 in order to rescue Portuguese prisoners of war, overthrow Touré's regime, and destroy PAIGC bases. They succeeded in the rescue but failed to dislodge Touré's regime.

His relations with Washington soured, however, after Kennedy's death. When a Guinean delegation was imprisoned in Ghana, after the overthrow of Nkrumah, Touré blamed Washington. He feared that the Central Intelligence Agency, as well as the Soviet Union, were plotting against his own regime even though he was taking economic aid from both parties.

During its first three decades of independence, Guinea developed into a militantly socialist state, which merged the functions and membership of the PDG with the various institutions of government, including the public state bureaucracy. This unified party-state had nearly complete control over the country's economic and political life. Guinea expelled the US Peace Corps in 1966 because of their alleged involvement in a plot to overthrow President Touré. Similar charges were directed against France; diplomatic relations were severed in 1965 and Toure did not renew them until 1975. An ongoing source of contention between Guinea and its French-speaking neighbors was the estimated half-million expatriates in Senegal and Ivory Coast; some were active dissidents who, in 1966, formed the National Liberation Front of Guinea (Front de Libération Nationale de Guinée, or FLNG).

International tensions erupted again in 1970 when some 350 men, under the leadership of Portuguese officers from Portuguese Guinea (now Guinea-Bissau), including FLNG partisans and African Portuguese soldiers, entered Guinea in order to rescue Portuguese prisoners detained in Conakry and capture Touré. Toure directed waves of arrests, detentions, and some executions of known and suspected opposition leaders in Guinea followed this military operation.

Between 1969 and 1976, according to Amnesty International, 4,000 persons on Guinea were detained for political reasons, with the fate of 2,900 unknown. After an alleged Fulani plot to assassinate Touré was disclosed in May 1976, Diallo Telli, a cabinet minister and formerly the first secretary-general of the OAU, was arrested and sent to prison. He died without trial in November of that year.

In 1977, protests against the regime's economic policy, which dealt harshly with unauthorized trading, led to riots in which three regional governors were killed. Touré responded by relaxing restrictions on trading, offering amnesty to exiles (thousands of whom returned), and releasing hundreds of political prisoners. Relations with the Soviet bloc grew cooler, as Touré sought to increase Western aid and private investment for Guinea's sagging economy.

He imprisoned or exiled his strongest opposition leaders. It is estimated that 50,000 people were killed under his regime. Over time, Touré arrested large numbers of suspected political opponents and imprisoned them in concentration camps, such as the notorious Camp Boiro. As a result of mass graves found in 2002, some 50,000 people are believed to have been killed under the regime of Touré.

Human Rights Watch in a 2007 report said that under Toure's regime, tens of thousands of Guinean dissidents sought refuge in exile, although this number is in dispute; some estimates are much higher.

Once Guinea began its rapprochement with France in the late 1970s, Marxists among Toure's supporters began to oppose his government's shift toward capitalist liberalisation. In 1978, Toure formally renounced Marxism and reestablished trade with the West.

Single-list elections for an expanded National Assembly were held in 1980. Touré was elected unopposed to a fourth seven-year term as president on 9 May 1982. A new constitution was adopted that month, and during the summer Touré visited the United States. While in Washington, Toure urged for more American private investment in Guinea, and claimed that the country had "fabulous economic potential" due to its mineral reserves. This was taken by US diplomats to be a confession of the failure of Marxism. It was part of his economic policy change that led him to seek Western investment in order to develop Guinea's huge mineral reserves. At the same time, however, the annual average income of Guineans was $140, life expectancy was only at 41 years, and the literacy rate was only 10%. Measures announced in 1983 brought further economic liberalization, including the delegation of produce marketing to private traders. 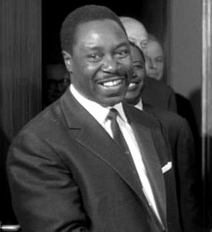 Touré died of an apparent heart attack on 26 March 1984 while undergoing cardiac treatment at the Cleveland Clinic in Cleveland, Ohio for emergency heart surgery; he had been rushed to the United States after being stricken in Saudi Arabia the previous day. Touré's tomb is at the Camayanne Mausoleum, situated within the gardens of the Conakry Grand Mosque.

Prime Minister Louis Lansana Béavogui became acting president, pending elections that were to be held within 45 days. During his short presidency, Beavoguí paid his respects to the founder of the republic. The Political Bureau of the ruling Guinea Democratic Party was due to name its choice as Touré's successor on 3 April 1984. Under the constitution, the PDG's new leader would have been automatically elected to a seven-year term as president and confirmed in office by the voters by the end of spring. Just hours before that meeting took place, the armed forces seized power in a coup d'état. They denounced the last years of Touré's rule as a "bloody and ruthless dictatorship." The constitution was suspended, the National Assembly dissolved, and the PDG abolished. Col. Lansana Conté, leader of the coup, assumed the presidency on 5 April, heading the Military Committee of National Restoration (Comité Militaire de Redressement National—CMRN). The military group freed about 1,000 political prisoners.

Louis Beavoguí, ousted interim president and possible successor to the regime, suffered from diabetes and was taken to receive medical treatment, he died four months later of natural causes (Diabetes).

Retrieved from "https://reallifevillains.miraheze.org/w/index.php?title=Ahmed_Sékou_Touré&oldid=153558"
Categories:
Cookies help us deliver our services. By using our services, you agree to our use of cookies.