On March 26th, 2014, he resigned from his military post, announcing that he would run as a candidate in the 2014 presidential election. The election, held between May 26th and May 28th, and which included only one opponent, was boycotted by most political parties and the Muslim Brotherhood and resulted in Sisi winning the presidency with more than 93% of the vote. Sisi was sworn into office as President of Egypt on June 8th, 2014. Sisi's government has given the Egyptian military unchecked power, and some media reports have labeled him a dictator and a strongman, comparing him to Egypt's former dictators.

According to the Human Rights Watch, Sisi's regime has used torture and enforced disappearances against his political opponents and criminal suspects. The military committed extrajudicial killings in its campaign against Wilayah Sayna, an ISIL affiliate in North Sinai. In addition to prosecutions, travel bans and asset freezes against human rights defenders, and repressive new legislation that threaten to kill the independent civil society. There have also been reports of war crimes being committed in the Sinai region as part of the ongoing insurgency against various militant Islamist and jihadist organizations in the area.

Sisi has also forged alliances with dictators Bashar al-Assad of neighboring Syria and Vladimir Putin of Russia. He has also provided aid to Saudi Arabia in their ongoing involvement in the Yemeni Civil War. He was listed by former US President Donald Trump as his "favorite dictator".

Sisi graduated from the Egyptian Military Academy in 1977, then served in the infantry. Like other Egyptian officers of his generation, he never saw combat, but he advanced through the ranks to command a mechanized infantry division and then served as the commander of Egypt’s northern military region. In 2010 he was appointed to the post of director of military intelligence.

Following the ouster of Egyptian Pres. Hosni Mubarak after an uprising in January and February 2011, Sisi was the youngest member of the Supreme Council of the Armed Forces (SCAF), a body of senior military officers that took over the governing of Egypt. He was elevated to the positions of defense minister and commander of the armed forces in August 2012 when Morsi, embroiled in a power struggle with the military, managed to force the most senior members of the SCAF into retirement and then promoted the little-known Sisi to the top position.

Sisi took centre stage in Egyptian politics in the summer of 2013, after a protest movement dubbed Tamarrud (“Rebellion”) emerged demanding that Morsi be removed or replaced through an early election. On June 30, demonstrations against Morsi had reached a size and intensity not seen since the ouster of Mubarak in February 2011, with some demonstrators chanting for Sisi to oust Morsi in a like manner.

On July 1 Sisi issued an ultimatum to Morsi to resolve the crisis within 48 hours or face military intervention. Morsi offered some negotiations but refused to step down or agree to early elections, so on July 3 the military deposed him and put him under arrest. A figurehead president, Adly Mansour, was installed, but it was clear that Sisi, who retained the title of defense minister, wielded power. 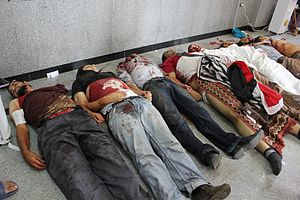 The deads of the Al-sisi coup

Meanwhile, Muslim Brotherhood leaders were arrested, and the group’s media channels were shut down. On July 8, as the Muslim Brotherhood staged a protest outside a military base, security forces opened fire and killed more than 50 people. Facing continued opposition from the Muslim Brotherhood, Sisi called on Egyptians to rally in support of the military against “violence and terrorism.” On July 26, hundreds of thousands of Egyptians across the country heeded the call and took to the streets to show their support.

With this show of support, the military wasted little time expanding their crackdown. The next day nearly 100 people were killed during a rally of Muslim Brotherhood supporters. On August 14, hundreds were killed when Egyptian security forces moved to disperse sit-ins outside the Rabaa al-Adawiya Mosque in Cairo; within the next several days, more than 1,000 had been killed in the crackdown.

All the while, Sisi found significant political support among Egyptians who were exhausted by two years of economic and political turmoil. Oversize portraits of him became an increasingly common sight in the streets, and a variety of political groups were formed to tout Sisi as a strong leader and urge him to seek the presidency.

Sisi himself denied having any desire to hold the office, but in March 2014 he confirmed expectations by announcing that he would resign from the military to run for president later that year. He entered the race as the overwhelming favourite, given his popularity and the fact that many of the most-prominent figures in Egyptian politics had already ruled out running in 2014. The election was held in May, and, as expected, Sisi easily defeated his only opponent, the leftist Hamdeen Sabahi.

As president, Sisi confronted renewed attacks by Islamist militants. In the Sinai Peninsula, the site of a long-running insurgency against the Egyptian government, attacks became more frequent and deadlier after a local extremist group pledged allegiance to the Islamic State in Iraq and the Levant (ISIL) in 2014. Sisi vowed to crush the insurgency with military force and launched large-scale operations aimed at rooting out militants.

Egypt’s return to stability under Sisi allowed him to keep his approval rating aloft throughout his first term. Infrastructure projects, investment in Egypt’s economy, and financial reform provided optimism for economic recovery, though improvements in living standards remained slow moving. Among his biggest projects was an expansion of the Suez Canal.

He is also accused of protecting those involved in the brutal murder of the Cambridge student Giulio Regeni, related to his government, who brutalized him excessively with multiple fractures, burn marks, cuts throughout the body and signs of electrocution on the penis.

Meanwhile, the regime’s ongoing endeavour for security and stability continued to meet criticisms of excessive suppression of political opposition. International human rights groups accused the government of using excessive force against political opponents and journalists, citing widespread reports that individuals viewed as threats by the government had been subjected to abusive actions, including indefinite detention, torture, asset confiscation, and restrictions on travel inside and outside the country.

Sisi won a second term in office in March 2018 in an election that was widely considered to be lacking in genuine competition. Several credible candidates had been excluded from contention for legal and procedural reasons, leaving Sisi to face a little-known opponent, Mousa Mostafa Mousa, who had been an outspoken supporter of Sisi’s until entering the race himself in late January. Sisi’s final vote total exceeded 97 percent, but voter turnout was low, only 41 percent.

Mohamed Morsi died in 2019 because his health problems deteriorated in prison and he was not given medical attention, although he was never physically assaulted, he was placed in solitary confinement 23 hours a day, this being a great violation of human rights.

Retrieved from "https://reallifevillains.miraheze.org/w/index.php?title=Abdel_Fattah_el-Sisi&oldid=157188"
Categories:
Cookies help us deliver our services. By using our services, you agree to our use of cookies.