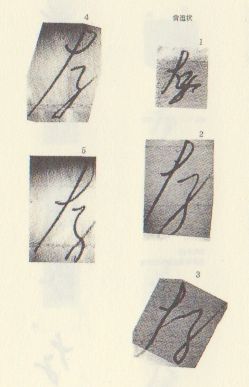 The ransom note.
The Sayama Incident was a 1963 murder case. It occurred in May of 1963. It was regarded as the highlight of discrimination of Japan's lower class the Burakumin. It was named after Sayama City, Saitama Prefecture, Japan, the place in which the murder occured.

The victim was a sixteen-year-old girl by the name of Yoshie Nakata who disappeared when she was returning home from school on May 1. A ransom note was later delivered at their home. The note demanded that they bring 200,000 yuans (which was the equivalent to $556 US dollars at the time) to a place nearby her house. Yoshie's sister (whom committed suicide) brought counterfeit money to the desired place and the police soon arrived. She later met a man who ran off before the police could catch him. On May 4, the body of Yoshie was found underground. The police implicated that she was also raped. A man that committed suicide in the same neighborhood had the same blood type as the suspect. Though it was determined that he was not the culprit since he had ED.

At a pig farm called Ishida Youtonjo, police arrested a  Burakumin man named  Kazuo Ishikawa for an unrelated crime. Although he denied committing the murder, by the time of June 20, he cracked from the pressure and admitted to the kidnapping and murder. People complained about the police pressuring him into giving what they believed was false information, however. He was then sentenced to death, but this was changed to life in prison. He was then released in 1994 and was still trying to find the real murderer and clear his name. He's still considered guilty, however. According to human rights activists and lawyers, they believed that the court didn't give Ishikawa a fair trial since he was a Burakumin.

Retrieved from "https://reallifevillains.miraheze.org/w/index.php?title=Sayama_Incident&oldid=40005"
Categories:
Hidden category:
Cookies help us deliver our services. By using our services, you agree to our use of cookies.