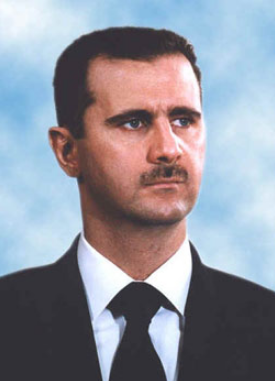 Bashar Hafez al-Assad (Arabic: بشار حافظ الأسد‎‎ Baššār Ḥāfiẓ al-ʾAsad, About this sound pronunciation (help·info) Levantine pronunciation: [baʃˈʃaːr ˈħaːfezˤ elˈʔasad]; born 11 September 1965) is the President of Syria, commander-in-chief of the Syrian Armed Forces, General Secretary of the ruling Ba'ath Party and Regional Secretary of the party's branch in Syria. On 10 July 2000, he was elected president succeeding Hafez al-Assad, his father, who had led Syria for 30 years and died in office a month prior. In both the Syrian presidential election, 2000 and subsequent 2007 election, Bashar Assad received votes in his favor in the upper 90th percentile in uncontested elections where other candidates were not permitted to run against him. On 16 July 2014, Bashar Assad was sworn in for a new seven-year term, after taking 88.7% of votes in the presidential elections, running against two regime sanctioned candidates, the first contested presidential election in Ba'athist Syria's history. an international delegation from more than 30 countries including Bolivia, Brazil, Cuba, Ecuador, India, Iran, Iraq, Nicaragua, Russia, South Africa and Venezuela issued a statement claiming the election was "free, fair and transparent". Assad graduated from the medical school of Damascus University in 1988, and started to work as a doctor in the army. Four years later, he attended postgraduate studies at the Western Eye Hospital, in London, specialising in ophthalmology. In 1994, after his elder brother Bassel was killed in a car crash, Bashar was recalled to Syria to take over Bassel's role as heir apparent. He entered the military academy, taking charge of the Syrian occupation of Lebanon in 1998. In December 2000, Assad married Asma Assad, born Akhras. The form of government Assad presides over has been designated as an authoritarian regime by political scientists. The Assad regime describes itself as secular, while experts contend that the regime exploits ethnic and sectarian tensions in the country to remain in power. The regime's sectarian base relying upon the Alawite minority has been noted. Once seen by the domestic and international community as a potential reformer, Assad disappointed those expectations definitively when he ordered crackdowns and military sieges on Arab Spring protesters, leading to the Syrian Civil War. The Syrian opposition, the United States, Canada, the European Union and the majority of the Arab League had called for al-Assad's resignation from the presidency. During the Syrian Civil War, an inquiry by the United Nations human rights chief found evidence to implicate Assad in war crimes and crimes against humanity. Assad was included in a list of 20 sample war crimes indictments of government officials and rebels handed to the International Criminal Court, by David Crane, an American professor at Syracuse University College of Law in New York. In November 2014, the prosecutor of the Special Tribunal for Lebanon announced that evidence would be brought against Assad.

Retrieved from "https://reallifevillains.miraheze.org/w/index.php?title=Fahad_Suleiman_Al-Bagaa&oldid=61731"
Categories:
Cookies help us deliver our services. By using our services, you agree to our use of cookies.