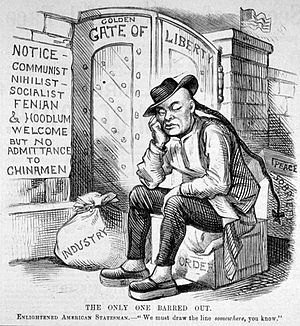 The Chinese Exclusion Act was a U. S. federal law that was signed by former President of the United States Chester A. Arthur on May 6, 1882. It targeted Chinese immigrants that wanted to come into the U.S. It was one of the first laws that outright signified a particular racial group, and it was criticized by several citizens of the U. S. because their country was founded by immigrants, and it would seem hypocritical to not allow the Chinese immigrants to come in to find better opportunities in a land that believes in the American dream, where everyone could be financially well. They also cited the Act as a legal means to discriminate against other races. However, many people, including the Knights of Labor, supported the Chinese Exclusion Act because they thought it industrialists used the immigrants as a wedge to keep wages low.

Retrieved from "https://reallifevillains.miraheze.org/w/index.php?title=Chinese_Exclusion_Act&oldid=47676"
Categories:
Cookies help us deliver our services. By using our services, you agree to our use of cookies.