A significant focus in the early years of the investigation was a bio-weapons expert named Steven Hatfill, who was eventually exonerated. Another suspect, 2001 anthrax attacks, became a focus of the inquiry around April 4, 2005. Ivins was a scientist who worked at the government's biodefense labs at Fort Detrick in Frederick, Maryland. On April 11, 2007, Ivins was put under periodic surveillance, and an FBI document stated that "Bruce Edwards Ivins is an extremely sensitive suspect in the 2001 anthrax attacks." On July 29, 2008, Ivins committed suicide with an overdose of acetaminophen. 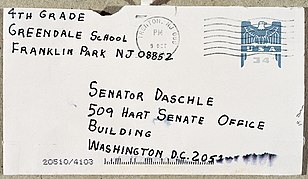 One of the anthrax letters. This one sent to Senator Thomas Daschle.
The 2001 anthrax attacks, also known as Amerithrax from its Federal Bureau of Investigation (FBI) case name, occurred within the United States for several weeks beginning on September 18, 2001, one week after the September 11 attacks. Letters containing anthrax spores were mailed to several news media offices and two Democratic U.S. Senators (Tom Daschle and Patrick Leahy), killing five people and infecting 17 others. According to the FBI, the ensuing investigation became "one of the largest and most complex in the history of law enforcement."

On August 6, 2008, based on DNA evidence leading to an anthrax vial in Ivins's lab, federal prosecutors declared Ivins to be the sole culprit of the crime. Two days later, Senator Chuck Grassley and Rep. Rush Holt called for hearings into the DOJ and FBI's handling of the investigation. On February 19, 2010, the FBI formally closed its investigation.

In 2008, the FBI requested a review of the scientific methods used in their investigation from the National Academy of Sciences, which released their findings in the 2011 report Review of the Scientific Approaches Used During the FBI's Investigation of the 2001 Anthrax Letters. The report cast doubt on the U.S. government's conclusion that Ivins was the perpetrator, finding that although the type of anthrax used in the letters was correctly identified as the Ames strain of the bacterium. There was insufficient scientific evidence for the FBI's assertion that it originated from Ivins's laboratory. The FBI responded by pointing out that the review panel asserted that it would not be possible to reach a definite conclusion based on science alone, and said that a combination of factors led the FBI to conclude that Ivins had been the perpetrator. Some information about the case related to Ivins's mental problems is still under seal. The government settled lawsuits filed by the widow of the first anthrax victim Bob Stevens for $2.5 million with no admission of liability. According to a statement in the settlement agreement, the settlement was reached solely for "avoiding the expenses and risks of further litigations."