Vladimir Vladimirovich Putin (Russian: Владимир Владимирович Путин, born October 7th, 1952) is the current President of Russia in his second stint as president since 2012, having previously served from 2000 until 2008 (acting president in 1999 following the resignation of Boris Yeltsin) In between his two stints as president he served as Prime Minister of Russia. He was previously an agent of the KGB during the Cold War and his domestic and foreign policy are based on his former job.

Putin is widely considered to be a Russian dictator; many watchdog organizations and human rights groups have cited human rights abuses and accusations of political corruption in his regime, and often his political opponents tend to mysteriously "disappear". He also has many alleged criminal connections.

His style of governance seems to be based on that of the former Soviet Union leader Leonid Brezhnev.

Putin was born in Leningrad (now Saint Petersburg) and studied law at Leningrad State University, graduating in 1975. Putin worked as a KGB foreign intelligence officer for 16 years, rising to the rank of Lieutenant Colonel, before resigning in 1991 to begin a political career in Saint Petersburg. He later moved to Moscow in 1996 to join the administration of President Boris Yeltsin.

He briefly served as Director of the Federal Security Service (FSB) and Secretary of the Security Council, before being appointed as prime minister in August 1999. After the resignation of Yeltsin, Putin became acting president, and less than four months later was elected outright to his first term as president and was reelected in 2004. As he was then constitutionally limited to two consecutive terms as president, Putin chose to become the prime minister again from 2008 to 2012, and was reelected as president in 2012, and again in 2018.

During his first tenure as president, the Russian economy grew for eight straight years, with GDP measured by purchasing power increasing by 72%, real incomes increased by a factor of 2.5, real wages more than tripled; unemployment and poverty more than halved and the Russians' self-assessed life satisfaction rose significantly. The growth was a result of a fivefold increase in the price of oil and gas which constitute the majority of Russian exports, recovery from the post-Communist depression and financial crises, a rise in foreign investment, and prudent economic and fiscal policies.

Serving under Dmitry Medvedev from 2008 to 2012, he oversaw large scale military reform and police reform. In 2012, Putin sought a third term as president and won with almost 64% of the vote. Falling oil prices coupled with international sanctions imposed at the beginning of 2014 after Russia's annexation of Crimea and the War in Donbass led to GDP shrinking by 3.7% in 2015, though the Russian economy rebounded in 2016 with 0.3% GDP growth, and the recession officially ended.

Development under Putin has included the construction of pipelines, the restoration of the satellite navigation system GLONASS, and the building of infrastructure for international events such as the 2014 Winter Olympics in Sochi. Putin received 76% of the vote in the 2018 election and was re-elected for a six-year term ending in 2024.

Under Putin's leadership, Russia has experienced democratic backsliding. Experts do not generally consider Russia to be a democracy, citing jailing of political opponents, purges and curtailed press freedom, and the lack of free and fair elections.

Russia has scored poorly on Transparency International's Corruption Perceptions Index, the Economist Intelligence Unit's Democracy Index and Freedom House's Freedom in the World index. Human rights organizations and activists accuse Putin of persecuting political critics and activists as well as ordering them tortured or assassinated. In February 2022, Putin warned that Ukraine's accession to NATO could embolden Ukraine to reclaim control over Russian-annexed Crimea or areas ruled by pro-Russian separatists in Donbas, saying: "Imagine that Ukraine is a NATO member and a military operation [to regain Crimea] begins. What – are we going to fight with NATO? Has anyone thought about this?" On 7 February, Putin said at a joint press conference with French President Emmanuel Macron that "[a] number of [Macron's] ideas, proposals ... are possible as a basis for further steps. We will do everything to find compromises that suit everyone." Putin promised not to carry out new military initiatives near Ukraine.

On 15 February, the Russian parliament's lower chamber, the State Duma, backed a resolution calling for diplomatic recognition of two self-proclaimed separatist republics in Donbas. On 21 February, Putin signed a decree recognizing the separatist republics as independent states. On 24 February, Putin in a televised address announced a "special military operation" in Ukraine, launching a full-scale invasion of Ukraine. He said the purpose of the "operation" was to "protect the people" in the predominantly Russian-speaking region of Donbas who, according to Putin, "for eight years now, have been facing humiliation and genocide perpetrated by the Kyiv regime". Putin said that "all responsibility for possible bloodshed will be entirely on the conscience of the regime ruling on the territory of Ukraine".

In response to what Putin called "aggressive statements" by the West, he put the Strategic Rocket Forces's nuclear deterrence units on high alert. U.S. intelligence agencies determined that Putin was "frustrated" by slow progress due to the unexpectedly strong Ukrainian defense, "directing unusual bursts of anger" at his inner circle. The White House and other observers questioned Putin's mental health after two years of isolation during the COVID-19 pandemic. On 28 February, as a condition for ending the invasion, Putin demanded Ukraine's neutrality, "denazification" and "demilitarisation", and recognition of Crimea, which had been annexed by Russia, as Russian territory. A Russian businessman is offering $1 million to any military officer who apprehends Putin "dead or alive" for committing war crimes in his invasion of Ukraine.

On 3 March, after a phone call between Putin and French President Macron, Macron's senior aide said that Putin "wanted to seize control of the whole of Ukraine. He will, in his own words, carry out his operation to 'de-Nazify' Ukraine to the end." Some analysts say Putin miscalculated when he launched a full-scale invasion of Ukraine, and is leading his country into an unwinnable war and economic collapse. On 4 March, Putin signed into law a bill introducing prison sentences of up to 15 years for those who publish "knowingly false information" about the Russian military and its operations, leading to some media outlets to stop reporting on Ukraine.

Kharkiv downtown street destroyed by Russian bombardment
His record on human rights has been marked by the flattening of Chechnya, the demolition of Georgia, the crackdown of all media, especially independently-owned media that has been critical of the Kremlin such as NTV, the instigation of an armed conflict in eastern Ukraine that culminated in the accidental downing of a civilian aircraft, the bombing of aid convoys, the slew of Kremlin opponents dropping dead from polonium poisoning, Russian soldiers taking long "vacations", and the suppression and abuse of protestors. Interestingly, when proceedings were about to be brought against him to the International Criminal Court for possible crimes against humanity, he immediately withdrew Russia as a member state.

Putin is also heavily involved in the ongoing Syrian Civil War, having supported the incumbent Bashar al-Assad government of Syria since the beginning of the Syrian conflict in 2011: politically, with military aid, and since 30 September 2015 also through direct military involvement. The latter marked the first time since the end of the Cold War that Russia entered an armed conflict outside the borders of the former Soviet Union.

During its campaign in Ukraine, it has been reported that Russia has violated international law not to use excessively dangerous weapons, such as the Cluster, the Novichok.[1] 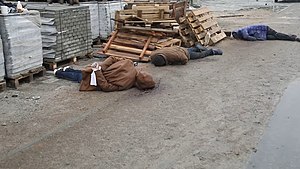 The mayor of Bucha, Anatoliy Fedoruk, said that at least 280 individuals from the city had to be buried in mass graves. Local residents had to bury another 57 bodies in another mass grave. Serhiy Kaplishny, a local coroner who fled but returned, said that as of 3 April, his team had collected more than 100 bodies during and after the fighting (including deaths of soldiers and deaths from natural causes).

He said that before leaving, he had hired a backhoe operator to dig a mass grave near the church, as the morgue was unable to refrigerate bodies due to the lack of electricity, and "It was a horror". He also said that since returning, he had picked up 13 bodies of civilians who had had their arms tied and been shot at close range.

The exact number of people killed is unknown. Fedoruk said at least 300 people had been found dead in the immediate aftermath of the massacre. In an interview with Reuters, deputy mayor Taras Shapravskyi said only 50 of the victims had been confirmed as having been extrajudicially executed. The figure of 300 was later revised to 403 on 12 April.

Defence Minister Oleksii Reznikov said, "In Bucha alone the death toll is already higher than in Vukovar", referring to the killing of hundreds of Croat civilians and prisoners of war during the Croatian War of Independence. On 13 April 2022, BBC News posted an article saying "at least 500 dead have been found since the Russians left" Bucha.

Vitaly Vinogradov, the Academic Dean of the Kyiv Slavic Evangelical Seminary, was among the dead in Bucha. The body of Zoreslav Zamoysky, a local freelance journalist, was also found in Bucha.

Retrieved from "https://reallifevillains.miraheze.org/w/index.php?title=Vladimir_Putin&oldid=156014"
Categories:
Cookies help us deliver our services. By using our services, you agree to our use of cookies.