Difference between revisions of "William Tolbert"

Tolbert was born in Bensonville, Liberia. An Americo-Liberian, he was the grandson of a former American slave from South Carolina who emigrated to Liberia in the Liberian exodus of 1878. The Tolbert clan was one of the largest Americo-Liberian families in Liberia.

Tolbert was first elected to the House of Representatives in 1943, and served until being elected Vice President. A Baptist minister, in 1965 he became the first African to serve as president of the Baptist World Alliance, and was also a member of Phi Beta Sigma fraternity. He became Grand Master of the Masonic Order of Liberia.

In 1971, he became president of Liberia. He severed Liberia's ties with Israel during the Yom Kippur War in October 1973 and spoke in favor of recognising national rights of the Palestinian people. However, Tolbert supported the United States on the Vietnam War, as had his predecessor, William Tubman. Tolbert was chairman of the Organisation of African Unity from July 1979 until his death.

During his tenure, he relaxed the True Whig regime. For example, in 1973 he authorized the creation of a Progressive Alliance of Liberia, the first opposition party in the country's history. However, he had to face growing dissatisfaction, largely due to the social inequalities between indigenous peoples, which represent 95% of the population, and the privileged African-American elite, composed of the descendants of American slaves who had settled in Liberia since 1821. 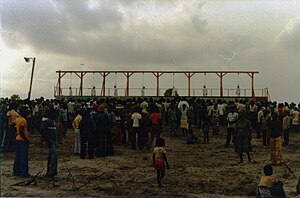 Between 1965 and 1977 more than 100 murders occurred in Harper County, Maryland, many of which were ritually killed due to mutilation and removal of body parts. During the 1970s, Liberians in Maryland County were constantly under threat of ritual murder. Between November 1976 and July 1977, 14 people had disappeared in the county, prompting Tolbert to fire Maryland County Superintendent James Daniel Anderson for failing to report missing persons and publicly declaring "Anyone who deliberately kills: the law will kill that person. " .

These social tensions were particularly acute since 1979. In April, a large demonstration crossed the streets of Monrovia in protest of the increase in the price of rice. President Tolbert gives the troop. At least 70 protesters were killed or trampled. This incident set fire to dust. Throughout the following year, riots and demonstrations shook the country. Tolbert tried in vain to restore order by arresting opposition leaders, but his attempts were unsuccessful and the disorder increased. Due to the intense repression Tolbert ordered the shooting of civilians.

In March 1980 Tolbert ordered the banning of the PAL, and had Gabriel Bacchus Matthews and the rest of the organization's leadership arrested on charges of treason.

In the early hours of April 12, 1980, 17 non-commissioned officers and soldiers led by Master Sergeant Samuel Doe launched a violent coup d'état; all of them were "indigenous" Liberians who later became the members of the People's Redemption Council, the governing body of the new regime. The group entered the Presidential palace and killed Tolbert, whose body was dumped into a mass grave together with 27 other victims of the coup. A crowd of angry Liberians gathered to shout insults and throw rocks at the bodies. Tolbert's body was later moved to a spot in Monrovia's Palm Grove Cemetery, not far from the bodies of those killed in the Rice Riots.

After this a 28-year-old coup guerrilla known as Samuel Doe led a coup d'etat that murdered President Tolbert in his bed, and then arrested and executed the members from his cabinet without rigth the lawyers. According to her widow, she witnessed someone stab her husband during the coup.

By the end of the month, most of the cabinet members of the Tolbert administration had been put on trial in a kangaroo court and sentenced to death. Many of them were publicly executed on April 22 at a beach near the Barclay Training Center in Monrovia. Only four Tolbert cabinet heads survived the coup and its aftermath; among them was the Minister of Finance, future president Ellen Johnson Sirleaf.

Tolbert allowed multi-partyism, when at the time, most governments were single-party until 1991

Retrieved from "https://reallifevillains.miraheze.org/w/index.php?title=William_Tolbert&oldid=129993"
Categories:
Cookies help us deliver our services. By using our services, you agree to our use of cookies.